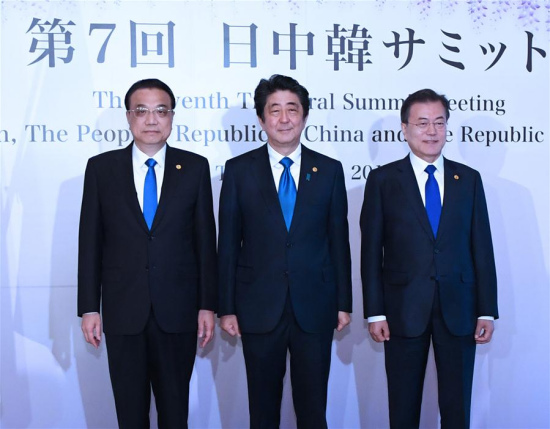 China, Japan and South Korea injected fresh confidence into global growth on Wednesday by reaffirming their commitment to economic globalization as well as trade and investment liberalization.

Chinese Premier Li Keqiang, Japanese Prime Minister Shinzo Abe and South Korean President Moon Jae-in made the pledge here at a trilateral meeting, giving a big boost for free trade against a rising undercurrent of protectionism in the world.

During the meeting, which marked the resumption of the trilateral leaders' meeting mechanism after a two-and-a-half-year hiatus, the three sides agreed to meet on a regular basis to expand their common interests and manage disputes.

China, Japan and South Korea are three big economies in the world, and are each other's key partner in trade and economic cooperation, said the Chinese premier, adding that they shoulder great responsibilities for boosting regional development, guiding regional economic integration and safeguarding regional peace and stability.

Strengthening trilateral cooperation, Li said, not only meets the needs of the three countries, but also accords with the expectations of the region and the international community at large.

Abe, for his part, pledged Tokyo's adherence to free trade. He said that as major traders in the world, the three sides all support free trade and open markets.

He called upon the three countries to come up with high-level trade rules that suit the current circumstances in the 21st century.

Meanwhile, Moon called the three nations inseparable cooperation partners, and said he hopes that the content of trilateral cooperation can be enriched.

The leaders' meeting came as some developed countries are retreating from free trade and threatening to flog others with soaring tariffs.

"The world needs more voices calling out the fact that trade is not a zero-sum game, but win-win (cooperation)," Yoshizaki said.

Besides their meeting, the three leaders also attended a business summit of their countries and a joint press conference.

They pledged to accelerate the negotiations for a trilateral free trade agreement (FTA) and to achieve the Regional Comprehensive Economic Partnership (RCEP) at an early date.

The Chinese premier also suggested that China, Japan and South Korea join hands to promote the building of an East Asian Economic Community, and stand together in an even more steadfast manner to safeguard the rules-based multilateral free trade system.

Pointing out that the China-proposed Belt and Road Initiative is creating new room for trilateral cooperation, Li said the three sides can carry out cooperation within a "China-Japan-South Korea+X" framework.

He proposed that the three countries roll out joint projects of this kind in production capacity cooperation, poverty reduction, disaster management and energy saving, so as to promote the development of other countries in the region.

The three countries' political will to speed up talks on a trilateral FTA and the RCEP will surely provide positive energy for promoting regional integration and growth, and for maintaining the trend of trade and investment liberalization, said Jin Jianmin, a senior fellow at Fujitsu Research Institute in Tokyo.

On expanding investment and industrial capacity cooperation, each of the three countries has its advantages, and prospects for their cooperation are broad, Li told the business summit.

Beijing is willing to work with Tokyo and Seoul to strengthen cooperation in such areas as digital economy, artificial intelligence, environmental protection, and medical and health services, Li said.

Noting that the next year marks the 20th anniversary of the launch of the China-Japan-South Korea cooperation mechanism, Li urged businesses of the three countries to join hands not only to bring benefits to the three countries but also to provide new driving force for world economic growth.

For his part, Abe said that the resumption of trilateral cooperation creates new opportunities for the three countries' economic development and mutually beneficial cooperation.

He called for more people-to-people exchanges and more cooperation in finance, scientific research and technological development, as well as in dealing with population ageing.

Noting that the Korean Peninsula is taking an important turn for peace, the South Korean president said this will create more business opportunities.

Moon urged the three sides to step up cooperation in such fields as joint research and development, energy, medical services, environmental protection and disaster relief, so as to bring tangible benefits to the people of the three nations.