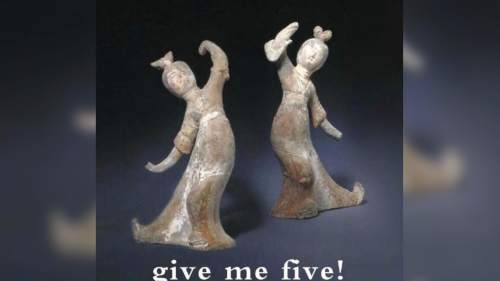 These painted pottery figurines can be dated back to the Tang Dynasty (618-907). According to the Palace Museum in Beijing, they are likely “to be performing what is known as a soft dance... belonging to ethnic Han peoples”, judging from their “costume and posture”. /Palace Museum Photo

Animation and memes ? these might be the last things you can refer to as cultural relics. However, such videos and pictures were widely shared on Chinese social platforms on Friday, the International Museum Day.

A video featuring the animated Chinese cultural relics has been posted to Douyin, one of the top video-sharing platforms in China that targets young users.

The video, named “The First Gala of Dramatic Cultural Relics”, was co-produced by Douyin and seven museums in China ? the National Museum of China and six provincial museums. It aims to promote a user-generated video competition hosted by the prestigious museums, which has attracted 42,000 participants so far.

By posting nine meme-style images, Sina Breaking News also joined in with the promotion of cultural relics on social platforms.

The account is ran by Sina Weibo, the Chinese answer of Twitter, and has shared the memes with its 52 million followers, receiving more than 30,000 thumbs-up for the post. Some of the images have been shared for years.

Weibo users have reacted to the re-imagining of historic artifacts, with some believing the videos and pictures are insulting.

“Not funny at all. You are just vulgarizing the relics in the name of International Museum Day,” commented @UglyJacky.

There were also people who thought it was interesting.

“[These videos and pictures are] quite inspiring. they helps us learn about the relics and are not spoofing them,” @Dongfangxuezhang said in defense of the account.

“Are you guys too serious about this?” asked @Itt-buzouxin.

Having fun with history is becoming increasingly popular in China. National Treasure, a TV program which was produced by CCTV, has quickly rose to the top of the country’s national television ratings as well as the trending charts on Weibo, after it began airing last December. Each relic is presented by celebrities who perform short sketches related to the story of the treasure.