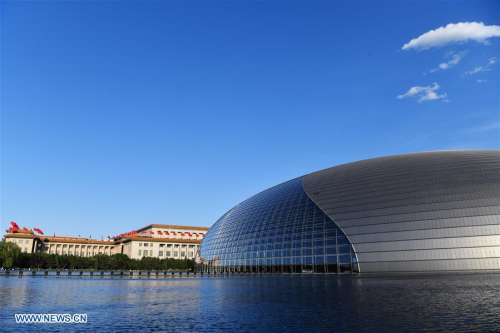 The National Center for the Performing Arts and the Great Hall of the People under a blue sky in 2017. (Photo/Xinhua)

China's efforts against air pollution have made steady progress since 2013, and the accumulated experience is valuable around the world, a regional head of a New York-based NGO said.

"The record of achievements that have been delivered in the past five years is amazing. Everybody living in Beijing can feel the difference in air quality," said Zhang Jianyu, chief representative for the Environmental Defense Fund in China.

"China managed to turn mission impossible into a systematic success," Zhang said, adding that progress has been observed in aspects such as mapping the sources and movement of pollutants, and adopting technologies to reduce and monitor emissions.

From policy design to implementation and enforcement, both at the central and local levels, China's system has improved, he said.

Beijing saw a dramatic decline in air pollution last year and in January reported the best air quality in the past five years. The average concentration of PM2.5－hazardous airborne particles－dropped to a record-low 34 micrograms per cubic meter, according to the municipal environmental protection bureau.

The reduction targets set by the central government in the national air pollution campaign were reached on schedule in most cities, including Beijing, said Li Ganjie, minister of ecology and environment.

The bluer skies were not easily won.

Beijing and neighboring regions, including Hebei province, have made aggressive moves against pollution through strict controls－closures of highly polluting factories, a shift to clean energy for winter heating and improvements to the industrial structure.

"One of the major breakthroughs－starting from last year, in particular－was curtailing the use of coal and controlling small-and medium-sized emission sources, which in the past were beyond measurement range," he said.

The Ministry of Ecology and Environment has assigned 5,600 inspectors for a year to 28 major cities in the Beijing-Tianjin-Hebei region since March, its largest campaign to date. More than 62,000 polluting plants have been shut down.

The bluer skies have also come at a price. The short-term actions such as shutting down plants and changing fuels have significantly affected some parts of society.

But it's necessary to help the governments buy the time and space needed to let long-term measures－technologies, policies and laws－take hold, Zhang said.

After setting up offices in China in 1998, the NGO has participated in projects with governments and institutes to help China establish market-based incentives for trimming emissions and strengthening the enforcement of environmental laws.

To date, more than 43,000 environmental officers have received training from its programs.

Daily cumulative fines with no upper limit－a powerful tool in deterring and regulating polluters－were adopted in the Environmental Protection Law based on the experience of the United States, Zhang said. China's law took effect in 2015. He added that the permit system is also a major step in pollution control.

It's time, he said, to "summarize and understand what China has gone through, and we can help to share that experience with other countries that are in the middle of this, or that are going to face it soon".

For example, India is suffering severe air pollution, and China's experience in creating countermeasures could help.

"Countries participating in the Belt and Road Initiative are a good place to share China's accumulated experience－or at least to reference it," Zhang said.

"The low-hanging fruit is gone. More challenges are in front of us, and it's just the beginning."