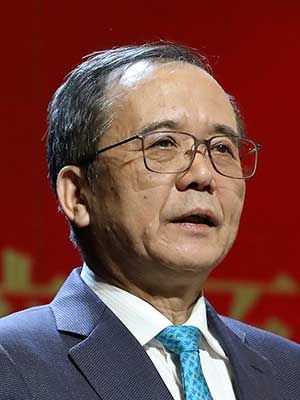 Peking University President Lin Jianhua has apologized after his mispronunciation of a word at its 120th anniversary celebration triggered online criticism.

Lin made the mistake while delivering a speech meant to inspire students at Peking University's 120th anniversary ceremony on Friday. It triggered heated debate online, with some netizens criticizing Lin for not knowing the word and questioning whether he was qualified to be head of one of China's best universities－known as the country's Harvard.

The word should be pronounced "honghu", indicating birds that can fly high. The president pronounced it as "honghao", which has no meaning.

The mistake went viral online after the speech.

Lin posted a letter of apology on Weiming BBS, the university's online bulletin board, on Saturday. He admitted in the letter that "I was not familiar with the pronunciation and learned it this time".

"The cost is high indeed," he wrote.

Some netizens applauded Lin's honest and brave apology, acclaiming him for being "able to face his shortcoming". But others did not accept his apology and said Lin should have been "prepared before reading the speech".

Lin, a chemist, said in the letter that despite being university president, he is "not good in literature and may have disappointed students and friends".

He said he received a poor education in primary and middle school due to the "cultural revolution" (1967-77) and spent his childhood and youth in a small farm in the Inner Mongolia autonomous region. He barely understood the difference between the subject and verb in a sentence before taking the college entrance exam.

"I am not writing this letter to defend my ignorance and mistake, but I want you to know the real me," he wrote. "Your president is not a flawless man. I have shortcomings and deficiencies, and I make mistakes."

He also said he wrote all his speeches by himself.

Lin, 62, has been the head of Peking University since 2015. He received his education at the university and has spent most of his academic life there.