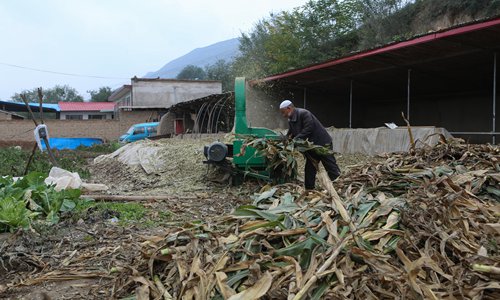 Ethnic minority areas have been a major focus of China's nationwide poverty alleviation campaign in the past five years. [Special coverage]

A lack of education, resources and infrastructure has prevented these largely remote regions from connecting with the outside world. Local people's needs are also diverse.

One villager told the Global Times he wanted to retain the mud wall of his old house in Northwest China's Gansu Province.

"I didn't let them renovate the wall last year, as one day it might be the only memory left of our village," said the 67-year-old man, who only gave his surname as Huang.

Maba village, where Huang lives, is surrounded by mountains and a few scattered Kangle county towns that form the Linxia Hui Autonomous Prefecture, one of the poorest regions in China.

In 2011, about 900,200 people lived below the national poverty line in Linxia, or more than half the population.

That figure plunged to 298,400 at the end of 2016, according to the autonomous prefecture government.

"The battle has been tough, as it has always been in regions where ethnic minorities live," a Linxia official surnamed Wang told the Global Times. Wang asked not to be fully named.

Many Linxia villages are stuck in the earliest stages of agricultural development and have a tough road ahead reaching the target of a well-off society by 2020, Wang said.

But the bright side is "we began to make changes," he said.

Villagers living in poverty are learning how to make ends meet while growing their own agricultural businesses.

All over China, there has been a war on poverty over the last two decades.

Some 12.4 million rural people were lifted out of poverty in 2016, the Xinhua News Agency reported, citing the State Council Leading Group Office of Poverty Alleviation and Development.

Poor people living in ethnic minority areas increased from 30.4 percent of the total population in 2011 to 32.6 percent in 2016, the report noted.

Maba, for example, has received 11 million yuan ($1.67 million) from central and local governments in the last three years.

"The first thing we did after we received poverty alleviation funding was to build a road," said Bai Shaoyun, Party chief of Shangwan township, which administers Maba.

Thanks to poverty alleviation funding, the road to the outside world is already finished for the village of Yanzi in neighboring Guanghe county, where residents are 90 percent Hui.