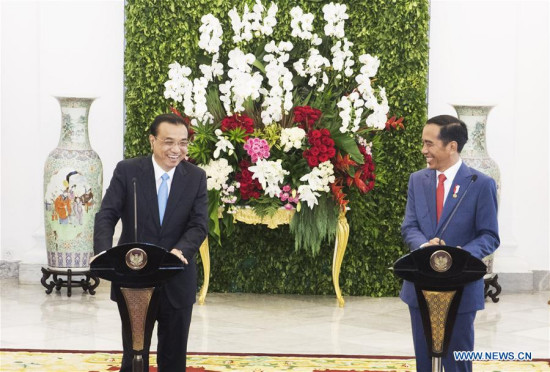 Chinese Premier Li Keqiang (L) and Indonesian President Joko Widodo meet the press after their talks at the presidential palace in Bogor, Indonesia, May 7, 2018. (Xinhua/Wang Ye)

China and Indonesia are important neighbors and natural cooperative partners with common interests. The two heads of state have held several successful meetings and promoted the political mutual trust and pragmatic cooperation to a new level, Li said.

Both as major developing countries and important states in the region, China and Indonesia working hand in hand to seek common development is of strategic importance for not only the two countries and two peoples, but also for the region and the whole world, Li added.

He suggested Beijing and Jakarta to take concrete measures to strengthen bilateral relations and dovetail the two countries' development strategies.

First, China and Indonesia should build up the three pillars of all-field cooperation at bilateral, regional and global levels within the framework of bilateral comprehensive strategic partnership, in order to better support the development of bilateral ties, Li said.

Second, the two sides should deepen the synergy of China's Belt and Road Initiative and Indonesia's "Global Maritime Fulcrum" vision, enhance industrial capacity cooperation, push forward the two landmark projects of Jakarta-Bandung high-speed railway and Indonesia's regional comprehensive economic corridors, so that the two peoples can enjoy the social and economic benefits at an early date, and the two countries can realize mutual benefits and win-win, Li noted.

Third, China and Indonesia should deepen cooperation on trade and investment. Li suggested Indonesia to export competitive products of good quality like palm oil, tropical fruits and coffee to China, and strengthen cooperation with China on fishery processing.

China encourages its enterprises to increase investment in Indonesia and hopes the Indonesian side could offer more policy support and convenience, Li added.

Fourth, both countries should further cement public support for the bilateral relations. People-to-people exchanges, interconnection and intercommunication should be intensified, while academic and youth exchanges, as well as cultural exchanges and mutual learning, should be promoted, Li said.

As this year marks the 15th anniversary of the establishment of China-ASEAN strategic partnership, China is willing to work with the Indonesian side to jointly promote the cooperation between China and the ASEAN to a higher level, the Chinese premier noted.

It is also necessary to speed up negotiations on the Regional Comprehensive Economic Partnership (RCEP) and the building of an East Asia economic community, Li added.

For his part, Widodo welcomed Li's visit to Indonesia, the first stop on the Chinese premier's first overseas trip since the new cabinet took office in March.

China is Indonesia's strategic partner, with bilateral cooperation in all fields such as economy, trade, investment and cultural exchanges deepening and realizing mutual benefits and win-win, he said.

The cooperation between Indonesia and China, which is based on respect to international laws, not only caters to the interests of the two countries, but also bears great significance to the world's peace and development, Widodo noted.

He thanked China's support on the construction of Indonesia's regional comprehensive economic corridors. Indonesia is willing to speed up the Jakarta-Bandung high-speed railway project to ensure the construction across the whole line to start at an early date, he added.

Indonesia is willing to strengthen cooperation with China under the framework of ASEAN-China, and enhance communication and coordination between the two countries on international and regional issues, he added.

The two sides also exchanged views on international and regional issues of mutual concern, and witnessed the signing of cooperation documents after the talks.

The Chinese premier is on an official visit to Indonesia from Sunday to Tuesday. His visit comes as this year marks the 5th anniversary of the establishment of the China-Indonesia comprehensive strategic partnership.