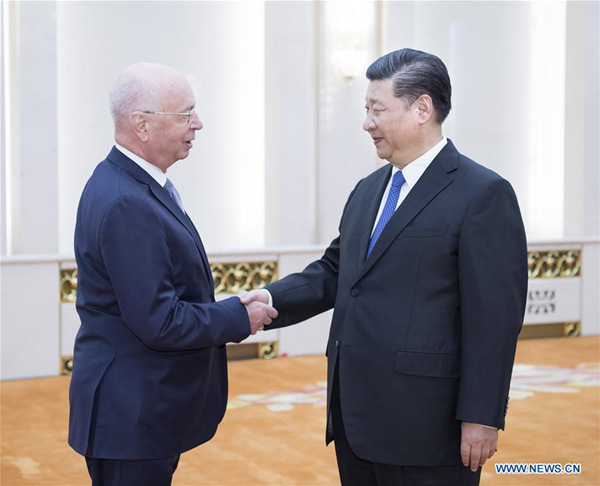 Chinese President Xi Jinping said on Monday that China would cooperate with the international community in opening up and seek win-win results through cooperation.

Xi made the remarks while meeting with Klaus Schwab, founder and executive chairman of the World Economic Forum (WEF), at the Great Hall of the People in Beijing.

Currently, the world economy has seen some positive momentum, but many problems faced have not been fundamentally resolved, he said.

Xi said that recently, the trend toward anti-globalization and protectionism had heated up, exacerbating risks and uncertainties in the world economy.

The fourth industrial revolution is on the rise, but it also contains many risks and challenges, Xi added.

"There are so many problems and challenges in the world," he said. "It is still necessary to respond through equal consultations and strengthened multilateral cooperation."

"History has repeatedly proved that isolation can only lead to a dead-end alley, and only by opening up and cooperation can the road become wider and wider.

"The big country bears important and special responsibility in opening up. As a responsible major country, China will play an active role in bringing bright, stable and promising prospects to the world and make more constructive contributions."

Xi announced a series of measures to expand China's opening up, at the just-concluded annual conference of the Boao Forum for Asia (BFA).

"Words must be followed by actions and actions must be taken with resolve," said Xi, noting that it was a solemn commitment to the Chinese people and the people of the world.

While saying China's cooperation with the WEF had coincided with the country's reform and opening-up process, Xi suggested that it was necessary for both sides to keep pace and advance with the times, strengthen cooperation and work together in pursuit of new driving forces for global economic growth, and find out practical and feasible proposals to address global challenges.

Schwab said Xi's speech at the WEF annual meeting last year was impressive and highly appreciated by the world, and that his speech at the opening ceremony of the BFA Annual Conference 2018 also drew global attention.

Referring to Xi's proposals on building a community with a shared future for mankind and building an open world economy, Schwab said they "charted a course for cooperation among countries against the backdrop that economic globalization and the multilateral trading system are facing challenges."

He said the WEF proposed to promote economic globalization and multilateralism, and opposed protectionism and unilateralism.

"The WEF takes pride in cooperation with China over the past 40 years," Schwab said.

He said the WEF was ready to improve long-term cooperation with China in promoting the Belt and Road Initiative and innovative development.

He said he hoped that the two sides could make joint efforts in strengthening global governance system and seeking solutions to world problems.