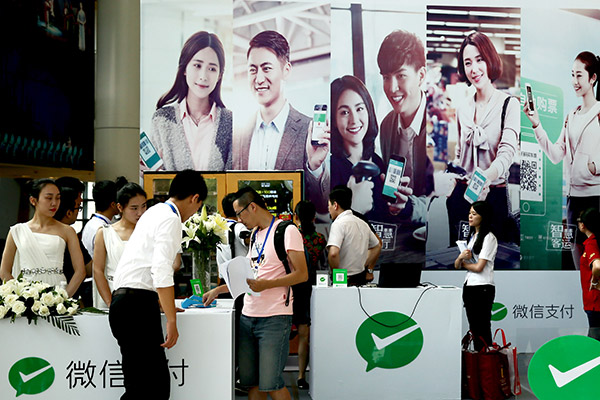 In the middle of London's Camden Market, a trader from China hands red-bean cakes to a group of tourists from Sweden, as tattooed locals dressed in black leather weave their way between food stalls cooking up dishes, including barbecued meat and fish and chips.

The market, which has been at the heart of London's punk scene since the 1970s, has evolved into one of the capital's busiest tourist attractions. It draws hundreds of thousands of people every week to its maze of clothing shops, tattoo and piercing parlors and food stands.

And starting this month, Chinese visitors will be able to buy goods with the mobile payment platform WeChat Pay.

Camden Market is a sharp contrast to luxury shopping hot spots such as Bicester Village and Oxford Street, where Chinese tourists spend millions of pounds each year. It might not seem to be the obvious choice for the United Kingdom launch of WeChat's hugely popular digital wallet, which accounts for 40 percent of the Chinese mobile payment market.

However, the number of Chinese visitors to Camden is climbing. In September 2016, 5 percent of its visitors were Chinese. The proportion doubled to 10 percent in March.

"In terms of demographics, the number of Chinese tourists in Camden is certainly growing, and in terms of a brand, Camden was an obvious choice. It's iconic in London," said Craig Jacoby, head of retail payments at Safe-Charge.

WeChat has worked with SafeCharge, a British payment technology company, to make WeChat Pay available at point-of-sale locations in the UK for the first time.

During the next four months, SafeCharge will provide more than 1,000 Camden Market vendors with a software update that enables in-store payment terminals to generate QR codes and perform WeChat Pay transactions.

Jacoby said WeChat Pay will soon be available at other shopping destinations in London, and the service is also launching at six large retailers in Paris as WeChat moves forward with its international expansion.

WeChat Pay rival Alipay has also made recent moves in Europe. In October, Alipay expanded its partnership with Dutch payment company Adyen to facilitate in-store mobile payments at retail partners in the UK.

In Camden, merchants and customers were upbeat about the development. Yi-yin Wei, a shopkeeper from Taiwan province, who sells red-bean cakes at a stall called Wheel Cake Island, thought the update would be useful.

"Chinese mainland people are used to paying for things with their phones, so it will be like home for them," Wei said.

Angel Chow, a tourist from Hong Kong visiting the market, said mainland shoppers will likely spend more money when they have WeChat Pay as an option.

"They will find it convenient if they can use their phones and will buy more. I think they will be excited to be able to use it in England," Chow said.

Other Camden merchants were not sure there would be enough demand. Vari McGeachy, manager of Books Iconica, said fewer than 5 percent of her customers are from Asia.

"We don't have many Chinese people coming through the doors, and when they do, they don't have a problem paying with cash or card," McGeachy said. "It wouldn't be worth having to train my staff about a new system."

SafeCharge Chief Executive David Avgi said in general, there is great motivation to accommodate Chinese consumers in Europe, where 50 percent of luxury purchases are made by Asian tourists.

And he said it is a matter of time before the mobile payment systems that are ubiquitous in China catch on in the West.