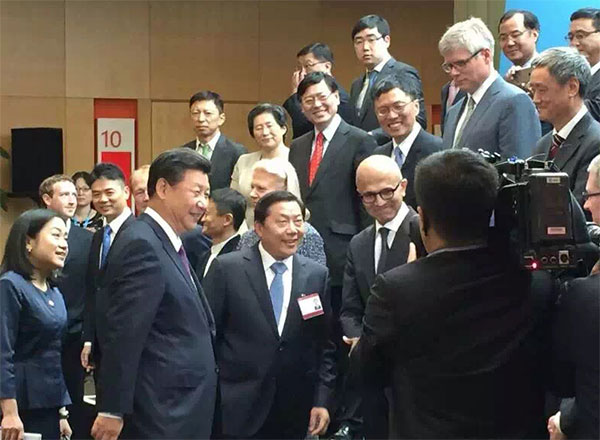 "We support large American businesses in setting up regional headquarters or research and development centers in China, and encourage more small- and medium-sized companies to expand their businesses in China. Meanwhile, China will keep increasing its investment in the United States," Xi said citing China's market-friendly policies.

Pushing for more active trade cooperation, Xi said trade is mutually beneficial as the American businesses that operate in China and cooperate with Chinese counterparts have played a positive role in China's development and, by harvesting generous profits at the same time, helped boost the American economy.

Boeing also revealed plans to build an aircraft finishing center in China, its first outside the United States.

To the east of the U.S. west coastal city, at Microsoft's campus in Redmond, where Xi was welcomed by Microsoft's co-founder Bill Gates and its CEO Satya Nadella, he spoke at the 8th U.S.-China Internet Industry Forum that saw the gathering of several tech executives, including Facebook's Mark Zuckerberg, Amazon's Jeff Bezos and Tencent founder Pony Ma Huateng.

A safe and stable cyberspace is of great significance for world peace and development, Xi said.

Addressing cybersecurity, one of the pressing concerns that is believed to sometimes strain China-U.S. relations, he added that China, besides advocating building a peaceful, safe, open, and cooperative cyberspace, proposes that all nations enact Internet public polices which are in accordance with their particular conditions.

He will head to Washington on Thursday where he will meet his U.S. counterpart Barack Obama.