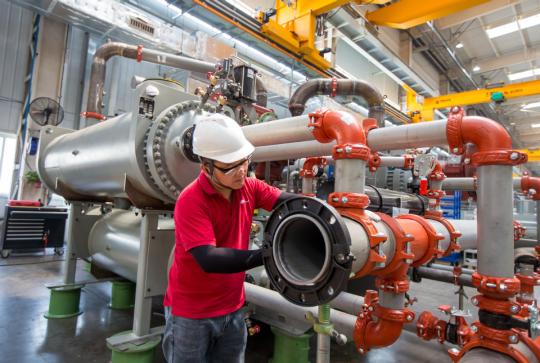 An employee works on the production line of a foreign-funded machinery manufacturer in Suzhou, Jiangsu province. (ZHAI HUIYONG/FOR CHINA DAILY)

The actual use of foreign direct investment into the Chinese mainland expanded 14.4 percent on a yearly basis to 1.09 trillion yuan between January and October of this year, said the Ministry of Commerce on Thursday.

In US dollar terms, the inflow soared 17.4 percent from the same period of last year to $168.34 billion, according to the ministry.

High-tech industries saw a rapid FDI increase of 31.7 percent during this period. Specifically, foreign investment in high-tech manufacturing rose 57.2 percent, while in the high-tech service sector it jumped 25 percent.

In the meantime, investment from the Republic of Korea, Germany and the United Kingdom, climbed by 106.2 percent, 95.8 percent and 40.1 percent, year-on-year, respectively.