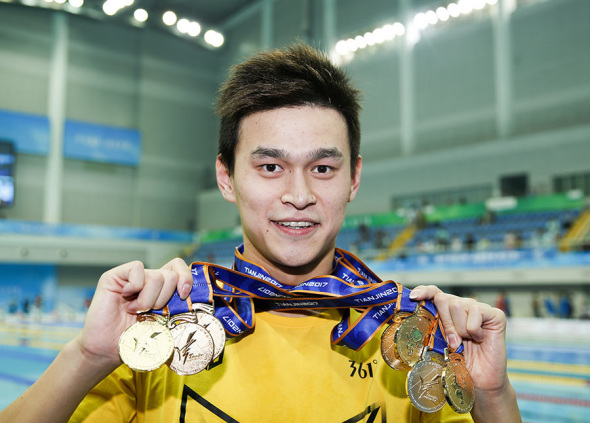 World and Olympic champion Sun Yang, displaying the six gold medals and one silver he won at the China National Games last September in Tianjin, is the one to watch when the China National Swimming Championships open on Friday in Taiyuan. (Photo/Xinhua)

China's National Swimming Championships will open on Friday in Taiyuan, the capital of Shanxi province, with a lot of attention on Olympic gold medalist Sun Yang who has been reunited with his former coach Zhu Zhigen after a four-year break.

The reunion of China's most decorated swimmer and the man who oversaw earlier parts of his career comes as Sun turns his full attention to this year's Asian Championships. He is also hoping their cooperation can lead to sustained success through to the 2020 Tokyo Summer Olympics.

"We knew each other over a decade with a good relationship," Sun said. "We made some communications for my perspective in training and games after I finished the Olympics in Rio. And the Chinese swimming team also would like to see that we can go to fight together."

Sun, 27, has become a mature athlete and is captain of the PRC team, but he is getting older, injuries have increased and the Olympics will likely be tougher in Tokyo.

The swimmer needs a more experienced coach to guide him, and Zhu will put a high demand in the 1,500m freestyle event on the world record holder.

"The 1,500 meters freestyle is a basic event for him. If he gives up this one and he will lose the rest of (the) events," the coach said. "Therefore Sun Yang has to make recovery on the previous training abilities, and when he has a desire to win the title, we will make good efforts."