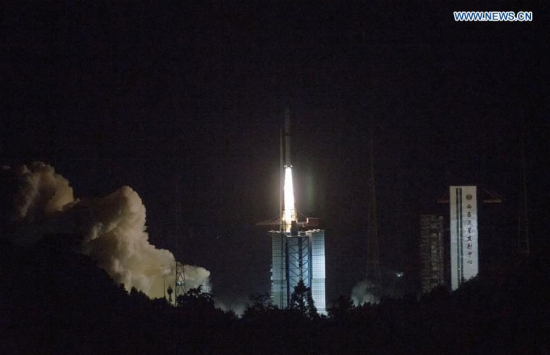 China launched a relay satellite early Monday to set up a communication link between Earth and the planned Chang'e-4 lunar probe that will explore the Moon's mysterious far side.

The satellite was carried by a Long March-4C rocket that blasted off at 5:28 a.m. from southwest China's Xichang Satellite Launch Center, according to the China National Space Administration (CNSA).

The satellite was named Queqiao, or Magpie Bridge. In a Chinese folktale, magpies form a bridge on the seventh night of the seventh month of the lunar calendar to enable Zhi Nyu, a weaver girl who is the seventh daughter of the Goddess of Heaven, to meet her beloved husband, cowherd Niu Lang, for one day. The couple were banished to opposite sides of the Milky Way as their love was not allowed.

"The launch is a key step for China to realize its goal of being the first country to send a probe to soft-land on and rove the far side of the Moon," said Zhang Lihua, manager of the relay satellite project.

About 25 minutes after lift-off, the satellite separated from the rocket and entered an Earth-Moon transfer orbit with the perigee at 200 km and the apogee at about 400,000 km. The solar panels and the communication antennas were unfolded.

Queqiao is expected to enter a halo orbit around the second Lagrangian (L2) point of the Earth-Moon system, about 455,000 km from the Earth. It will be the world's first communication satellite operating in that orbit.

But the mission must overcome many challenges, including multiple adjustments to its orbit and braking near the Moon and taking advantage of the lunar gravity, Zhang said.

Chinese scientists and engineers hope the Queqiao satellite will form a communication bridge between controllers on Earth and the far side of the Moon where the Chang'e-4 lunar probe is expected to touch down later this year.

Monday's launch was the 275th mission of the Long March rocket series.

Tidal forces of the Earth have slowed the Moon's rotation to the point where the same side always faces the Earth, a phenomenon called tidal locking. The other face, most of which is never visible from Earth, is the far side or dark side of the Moon, not because it's dark, but because most of it remains unknown.

With its special environment and complex geological history, the far side is a hot spot for scientific and space exploration. The Aitken Basin of the lunar south pole region on the far side has been chosen as the landing site for Chang'e-4. The region is believed to have great research potential.

However, landing and roving require a relay satellite to transmit signals. The Chang'e-4 mission will be more complicated than Chang'e-3, China's first soft landing on the Moon in 2013.

Establishing a communication link is essential for the success of the Chang'e-4 mission, said Bao.

The satellite, weighing about 400 kg and with a designed life of three years, carries several antennas. One, shaped like an umbrella with a diameter of 5 meters, is the largest communication antenna ever used in deep space exploration, said Chen Lan, deputy chief engineer of the Xi'an Branch of the China Academy of Space Technology (CAST).

The satellite could stay in the halo orbit around the L2 point of the Earth-Moon system for a long time by using relatively little fuel, thanks to the gravitational equilibrium at that point.

Together with Queqiao, two microsatellites, Longjiang-1 and Longjiang-2, were launched to orbit the Moon to conduct ultra-long-wave astronomical observation, which could help scientists study the cosmic dawn.

The far side of the Moon is such a place, as the body of the Moon shields against radio interference from the Earth. From there, astronomers can study the origins and evolution of stars and galaxies, peering into the dawn of the universe.

"Exploring the cosmic dawn is our long-term goal, and Longjiang-1 and Longjiang-2 are a preliminary experiment that could lay the foundation for future exploration," said Chen Xuelei, a cosmologist with the National Astronomical Observatories, who leads a team to analyze the data of the microsatellites.

The relay satellite is also equipped with a low-frequency radio spectrometer developed by Dutch scientists to help scientists "listen" to the deeper reaches of the cosmos.

A small lunar optical imaging detector developed by Saudi Arabia is installed on the satellite.

China's lunar exploration program will be a new research platform for scientists around the world. The lander and rover of Chang'e-4 will be equipped with instruments developed by Germany and Sweden, said Sun Zezhou, chief designer of the Chang'e-4 mission.

In addition, the satellite carries a reflector developed by the Sun Yat-sen University to conduct laser-ranging experiments between the relay satellite and an observatory on the ground at a maximum distance of 460,000 km. If successful, it will set a new record for this kind of experiment, said Zhang.

REACHING FOR THE FUTURE

China has outlined an ambitious blueprint for deep space exploration, including the Chang'e-5 lunar probe in 2019.

After fulfilling the three steps of its lunar probe program -- orbiting, landing and returning -- China will further explore the Moon, including landing and probing the polar regions, said Tian Yulong, CNSA secretary general.

China will launch its first Mars probe in 2020, and it is expected to orbit, land and put a rover on the Red Planet.

It also plans to probe asteroids around 2022, followed by a probe in 2028 to bring Mars samples back to Earth. An exploration mission to the Jupiter system is planned around 2029.

Experts have proposed building a research base on the Moon in the future.