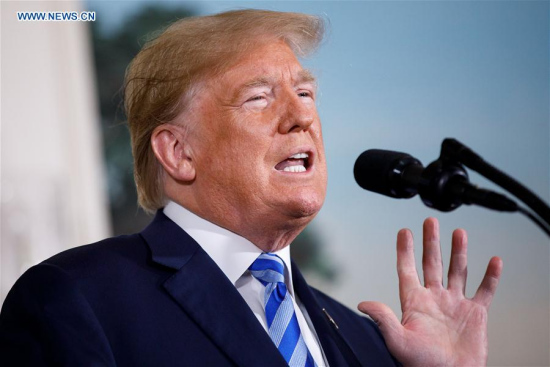 Following U.S. President Trump’s announcement that the U.S. will be withdrawing from the Iran nuclear deal, international reaction has been swift ? both in support and against the decision. Here is a collection of responses from across the world.

President Hassan Rouhani said on Tuesday that Iran would remain committed to a multinational nuclear deal despite US President Donald Trump’s decision to withdraw from the 2015 agreement designed to deny Tehran the ability to build nuclear weapons.

“If we achieve the deal’s goals in cooperation with other members of the deal, it will remain in place... By exiting the deal, America has officially undermined its commitment to an international treaty,” Rouhani said in a televised speech.

“I have ordered the foreign ministry to negotiate with the European countries, China and Russia in coming weeks. If at the end of this short period we conclude that we can fully benefit from the JCPoA with the cooperation of all countries, the deal would remain,” he added.

Rouhani assured ordinary Iranians, frustrated by high unemployment and stagnant living standards, that Trump’s decision would have no impact on Iran’s oil-reliant economy.

“Our heroic people will not be affected by this psychological attack... Iran’s economic progress will continue. Our people should not be worried at all,” he said.

Netanyahu has been a leading critic of the deal, saying it did not contain sufficient safeguards to prevent Iran from reaching nuclear-weapons capability or address Iran’s other activities across the region or its long-range missile program.

“The deal didn’t reduce Iran’s aggression, it dramatically increased it, and we see this across the entire Middle East,” he said in televised comments following Trump’s announcement. “Despite the deal, the terrorist regime in Tehran is developing a ballistic missiles capability, ballistic missiles to carry nuclear warheads far and wide, to many parts of the world.”

Netanyahu said that leaving the nuclear deal unchanged along with Iran’s other operations in the region “is a recipe for disaster, a disaster for our region, a disaster for the peace of the world.”

Joint statement from leaders of France, Germany and the UK:

It is with regret and concern that we, the Leaders of France, Germany and the United Kingdom take note of President Trump’s decision to withdraw the United States of America from the Joint Comprehensive Plan of Action.

Together, we emphasize our continuing commitment to the JCPoA. This agreement remains important for our shared security. We recall that the JCPoA was unanimously endorsed by the UN Security Council in resolution 2231. This resolution remains the binding international legal framework for the resolution of the dispute about the Iranian nuclear programme. We urge all sides to remain committed to its full implementation and to act in a spirit of responsibility.

According to the IAEA, Iran continues to abide by the restrictions set out by the JCPoA, in line with its obligations under the Treaty on the Non-Proliferation of Nuclear Weapons. The world is a safer place as a result. Therefore we, the E3, will remain parties to the JCPoA. Our governments remain committed to ensuring the agreement is upheld, and will work with all the remaining parties to the deal to ensure this remains the case including through ensuring the continuing economic benefits to the Iranian people that are linked to the agreement.

We urge the U.S. to ensure that the structures of the JCPoA can remain intact, and to avoid taking action which obstructs its full implementation by all other parties to the deal. After engaging with the U.S. Administration in a thorough manner over the past months, we call on the U.S. to do everything possible to preserve the gains for nuclear non-proliferation brought about by the JCPoA, by allowing for a continued enforcement of its main elements.

We encourage Iran to show restraint in response to the decision by the U.S.; Iran must continue to meet its own obligations under the deal, cooperating fully and in a timely manner with IAEA inspection requirements. The IAEA must be able to continue to carry out its long-term verification and monitoring programme without restriction or hindrance. In turn, Iran should continue to receive the sanctions relief it is entitled to whilst it remains in compliance with the terms of the deal.

There must be no doubt: Iran’s nuclear program must always remain peaceful and civilian. While taking the JCPoA as a base, we also agree that other major issues of concern need to be addressed. A long-term framework for Iran’s nuclear programme after some of the provisions of the JCPoA expire, after 2025, will have to be defined. Because our commitment to the security of our allies and partners in the region is unwavering, we must also address in a meaningful way shared concerns about Iran’s ballistic missile programme and its destabilising regional activities, especially in Syria, Iraq and Yemen. We have already started constructive and mutually beneficial discussions on these issues, and the E3 is committed to continuing them with key partners and concerned states across the region.

We and our Foreign Ministers will reach out to all parties to the JCPoA to seek a positive way forward.

The Russian Foreign Ministry said Tuesday in a statement that Moscow is deeply disappointed by the US withdrawal from the Iran nuclear deal and there are no grounds for such a move.

“Iran strictly adheres to its obligations, which is regularly confirmed by the International Atomic Energy Agency (IAEA). We fully support and welcome this,” the ministry said, adding that Washington’s action undermined international trust in the IAEA.

The United States is once again acting contrary to the opinion of most countries, caring about its own interests, and grossly violating the norms of international law, it said.

It is rare a preceding US president will publicly criticize his successor on foreign policy. But within a couple hours of Donald Trump announcing US withdrawal from the Iran nuclear deal, Barack Obama took to his Facebook page to deliver a point-by-point rebuttal to the decision. Obama, whose administration supported and helped usher in the international 2015 agreement with Tehran, stated that walking away from the deal unilaterally “risks eroding America’s credibility, and puts us at odds with the world’s major powers.”

"That is why today’s announcement is so misguided. Walking away from the JCPoA turns our back on America’s closest allies, and an agreement that our country’s leading diplomats, scientists, and intelligence professionals negotiated. In a democracy, there will always be changes in policies and priorities from one Administration to the next. But the consistent flouting of agreements that our country is a party to risks eroding America’s credibility, and puts us at odds with the world’s major powers," former president Obama’s statement said.