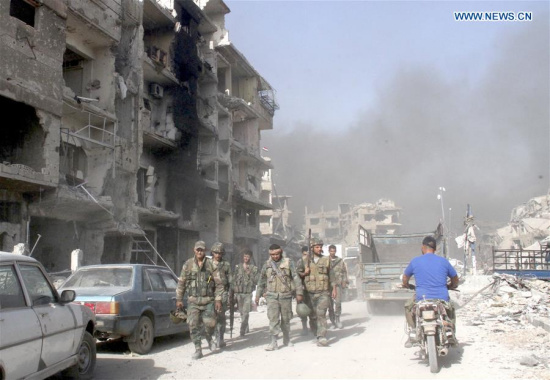 yrian soldiers walk in the Hajar al-Aswad district, south of Damascus, Syria, on May 21, 2018, just hours after it was declared free of the Islamic State (IS) militants. For the first time in seven years, Syria's capital Damascus was declared secure and empty of any rebel presence on Monday, following the defeat of the Islamic State (IS) in their last strongholds south of the capital, an achievement that closed the last chapter of war in the Syrian capital. (Xinhua/Hummam Sheikh Ali)

For the first time in seven years, Syria's capital Damascus was declared secure and empty of any rebel presence on Monday, following the defeat of the Islamic State (IS) in their last strongholds south of the capital, an achievement that closed the last chapter of war in the Syrian capital.

The battles against the IS have renewed a month ago, as the government forces were pushing hard to eradicate the terror-designated group from Hajar al-Aswad and the nearby Yarmouk Camp, both the last IS-held areas in the capital.

The sounds of airstrikes and artillery shelling targeting the IS positions in those areas and nearby pockets were the themes of the month-long battles, as the buildings in Hajar al-Aswad and Yarmouk Camp are so close to one another, almost cramming the neighborhoods there.

The structure of those areas made it extremely hard for the infantry units to easily storm there easily, which explained the intensified airstrikes and artillery shelling against the IS positions.

The Syrian army on Monday declared the entire Damascus city and its countryside secure, with the defeat of IS in their last stronghold south of Damascus.

In a statement, the army said the significance of this achievement emanates from the defeat of the most "vicious terrorist group" and proves that the Syrian army has become more powerful and determined to eliminate the terrorist groups in other Syrian areas.

Following the victory declaration, Xinhua reporters visited Hajar al-Aswad area, and it was a fresh battlefield.

Black and white smoke was still spiraling outward into the air over the area, with the heavy smell of smoke penetrating the nose strongly. The smoke was heavy and it felt as if the fog has enshrouded the area, making it difficult to see clearly.

A fire was also seen gutting some homes and streets, while the rubble was everywhere with pancaked buildings, whose rooftops have kneeled down and kissed the ground.

The spectacle was a total disaster in that area, and it seemed the normal result of the presence of a terror-designated group such as IS in a vital area only a few kilometers from Damascus.

While the Syrian army officially denied it, activists such as the Syrian Observatory for Human Rights said the IS militants had finally surrendered and evacuated to the Syrian desert.

This claim was denied by the state media, which said that only women, children and elderly men were evacuated from Hajar al-Aswad.

Either way, the result is the same that Damascus is now safe all around, according to the Syrian army.

"This achievement of liberating Hajar al-Aswad and Yarmouk Camp is considered very big as it restores the peace and security to Damascus and its countryside," the officer said.

Meanwhile, Maher Ihsan, a Syrian political expert, told Xinhua that the declaration of the capital safe has a political significance as the capital, which is the core of control of the government of President Bashar al-Assad, is now safe and far from any threat, contrary to previous years when the rebels' threat was reaching the heart of the capital with mortar shells.

"This means that the government is in a strong position now that the capital is entirely under control and the threat of the rebels on the capital has been eliminated completely," he said.

The Yarmouk Camp, which is adjacent to Hajar al-Aswad, was largely populated by Palestinian refugees in Damascus, the reason why it was called a "camp"; the fact is that this area was booming ahead of the crisis as it constituted of several neighborhoods and marketplaces that were bustling with people.

The Syrian army turned the focus on Hajar al-Aswad and the Yarmouk Camp after capturing the entire Eastern Ghouta countryside east of Damascus, as well as the eastern part of Qalamoun region north of Damascus, after the rebels withdrew to northern Syria areas this month.

IS has lost its major stronghold late last year, with the Syrian army capturing the Deir al-Zour city in eastern Syria as well as large swathes of the Syrian desert near the Iraqi border. The Kurdish-led Syrian Democratic Forces (SDF) also stripped the IS of its de facto capital of Raqqa north of Syria.

Now, the IS still holds some areas in the eastern province of Deir al-Zour, namely in villages on the eastern bank of the Euphrates River, where the SDF is now fighting against the terror group.