China's development does not threaten others: senior military officer 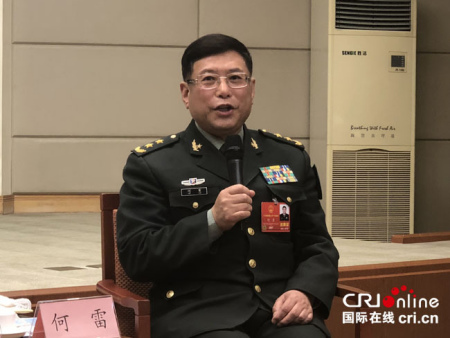 Lieutenant-General He Lei, deputy head of the Academy of Military Science of the People's Liberation Army (PLA), meets the press in Beijing, March 8, 2018. [Photo: cri.cn]

A senior Chinese military officer on Thursday defended the proposed rise of China's annual defense budget against a new round of "China threat theory."

Whether a country is a threat to others or not is not determined by its national strength and armed forces, but by the policy it adopts, said Lieutenant-General He Lei, deputy head of the Academy of Military Science of the People's Liberation Army (PLA).[Special coverage]

He made the remarks at a group interview on the sidelines of the annual session of the 13th National People's Congress (NPC).

"China has always followed the path of peaceful development and pursued a national defense policy that is in its nature defensive," said He, who is also a deputy to the NPC.

Therefore, China's development does not pose a threat to any other country, said He, stressing that no matter what stage of development it reaches, China will never seek hegemony or engage in expansion.

In addition, it will never engage in "arms race" with any other country, said He.

China plans to raise its defense budget by 8.1 percent to 1.11 trillion yuan (about 175 billion U.S. dollars) in 2018, according to a budget report submitted to the NPC session on Monday.

China's defense budget is objective, authentic, and transparent, said He, adding that the increase is legitimate and prudent.

He explained that a large part of the increased spending is for upgrading equipment, supporting military reforms, and improving the training conditions and welfare of servicemen and women.

Hyping up the "China threat theory" is an outdated trick aimed at inciting confrontation between China and its neighbors, said He.