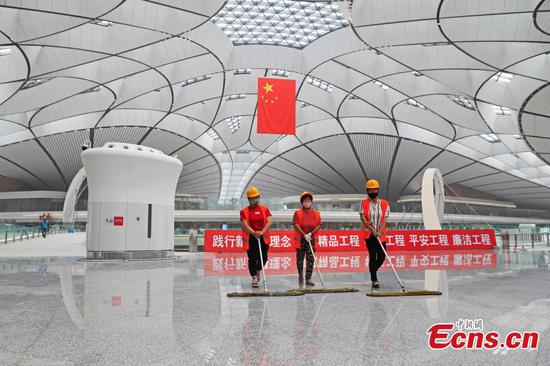 Passengers will be able to travel through the new airport to Shanghai, Guangzhou, Chengdu, and Kunming, among other domestic routes, from Sept. 30.

According to information available on the platform, one flight departing from the new airport for Guangzhou costs 1,578 yuan, which is cheaper than a comparable flight from Beijing Capital International Airport, which is 1,750 yuan at least.

International flights from the new airport to London, Helsinki, Casablanca, Fukuoka, and Kathmandu are also cheaper than those departing from the older airport.

Beijing Daxing International Airport, located 46 kilometers south of downtown Beijing, has been designed to relieve pressure on the overcrowded Beijing Capital International Airport. It sits at the junction of Beijing's Daxing District and Langfang, a city in neighboring Hebei Province. It is forecasted to see its passenger throughput reach 72 million in 2025, and further increase to 100 million by 2040.