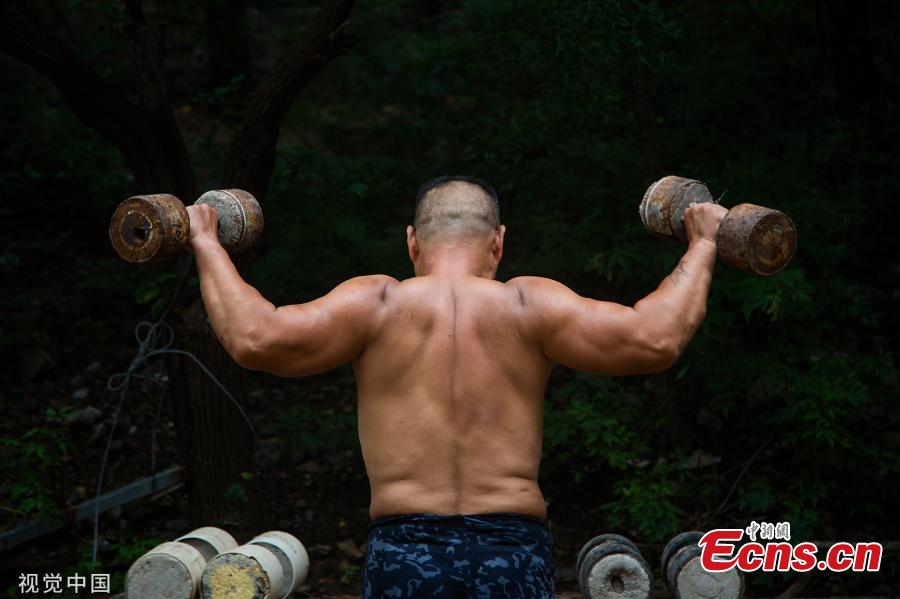 In 2009, China began promoting August 8 as the National Fitness Day in order to promote the "sport for all" program and commemorate the Beijing Olympics. All over the country, people of all ages can be found taking part in a variety of sporting pursuits, some commonplace, others more unique. 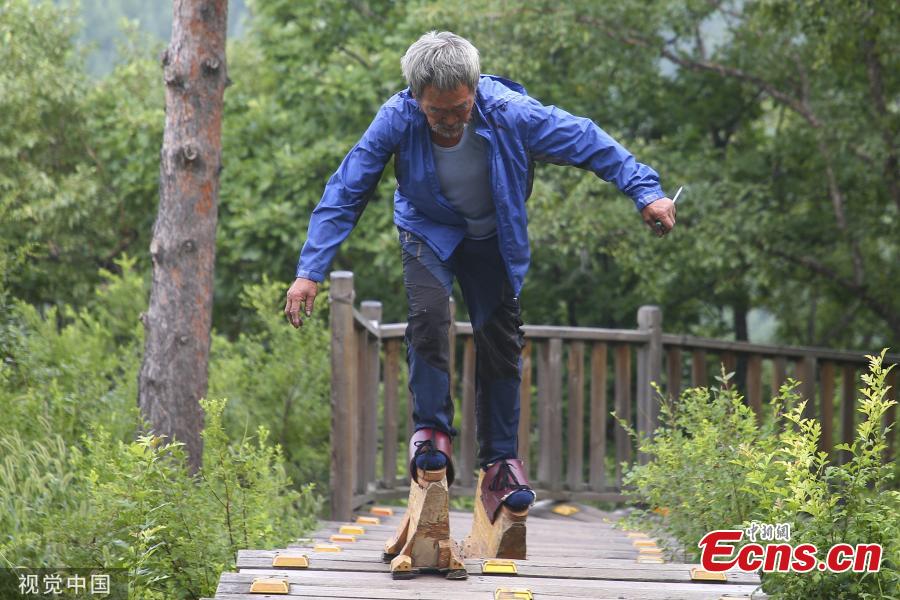 Lu Jingfeng, who is in his seventies, attempts 1,876 steps with his feet on 30-centimeter-tall wooden blocks in Yanji, Jilin Province. (Photo/VCG) 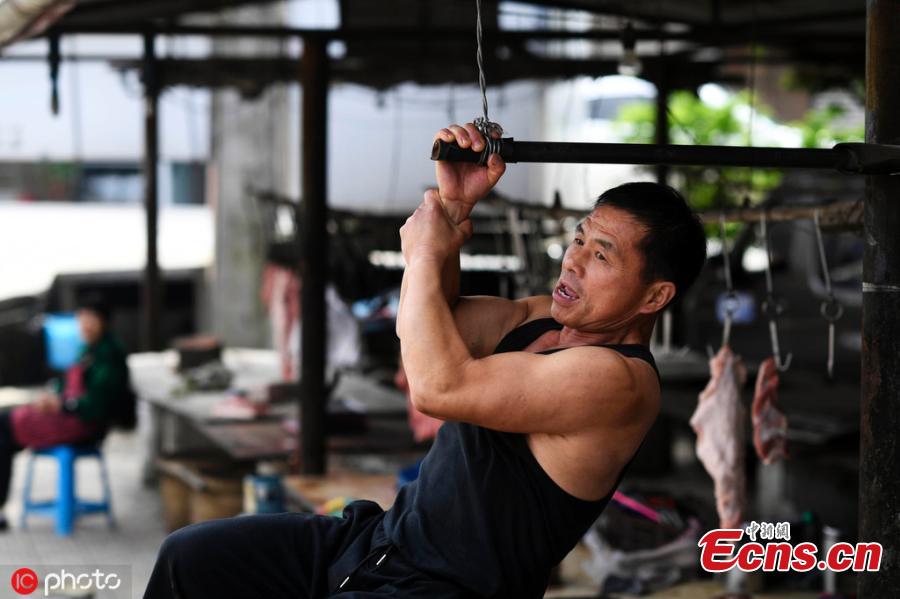 Pork vendor Liu Zhiyue, 57, works out with rings during free moments at his store. During 40 years as a pork vendor, he’s earned a reputation for both his business integrity and his love of fitness. (Photo/Icphoto) 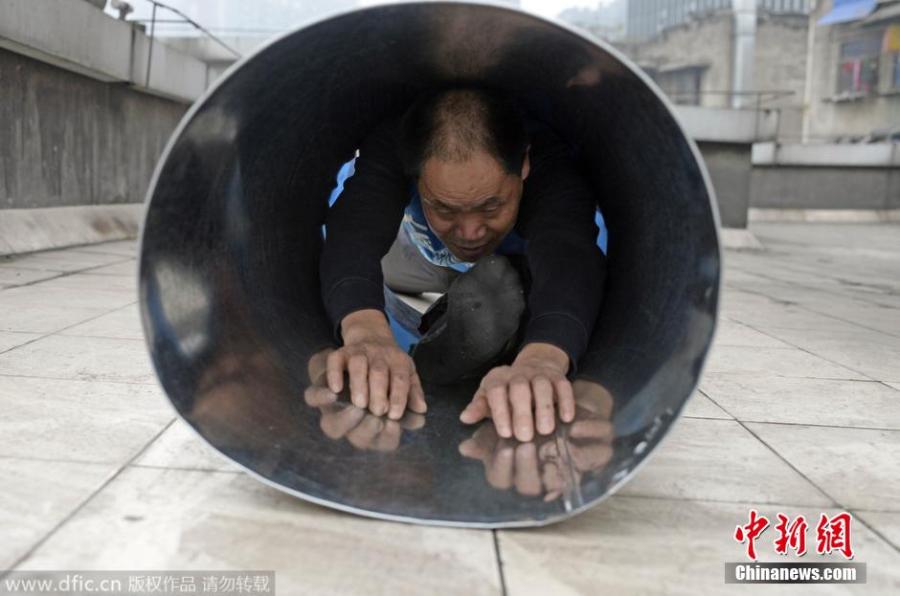 Yu Jun crawls forward inside a barrel that is 40 centimeters in diameter in Jiangbei District, Chongqing. Yu has created some fitness programs that he says allow every part of his body to exercise. He usually spends one hour a day working out. (Photo/Icphoto) 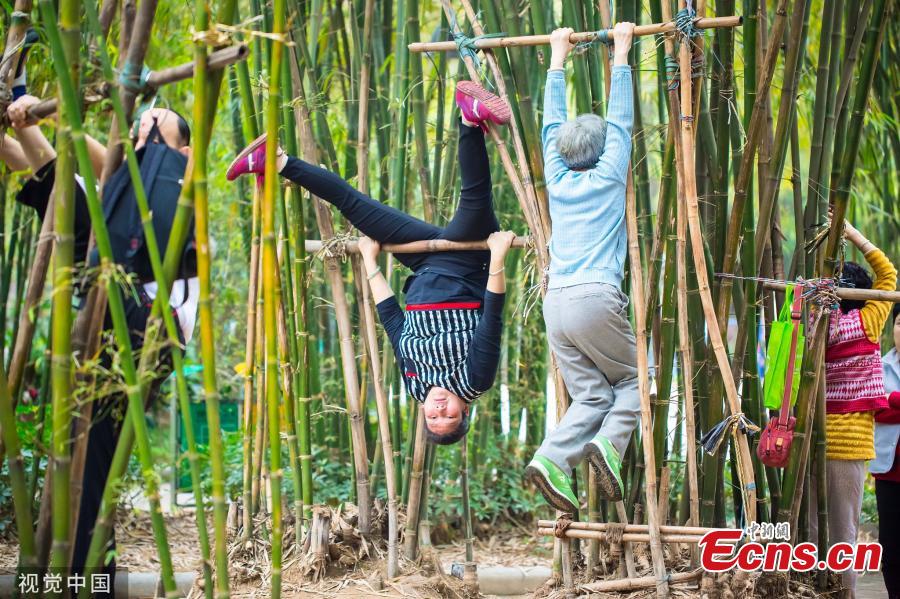 Xiaogang Park in Guangzhou City, Guangdong Province attracts many elderly people to work out, and they can be seen doing activities such as pull-ups and standing upside down. (Photo/VCG) 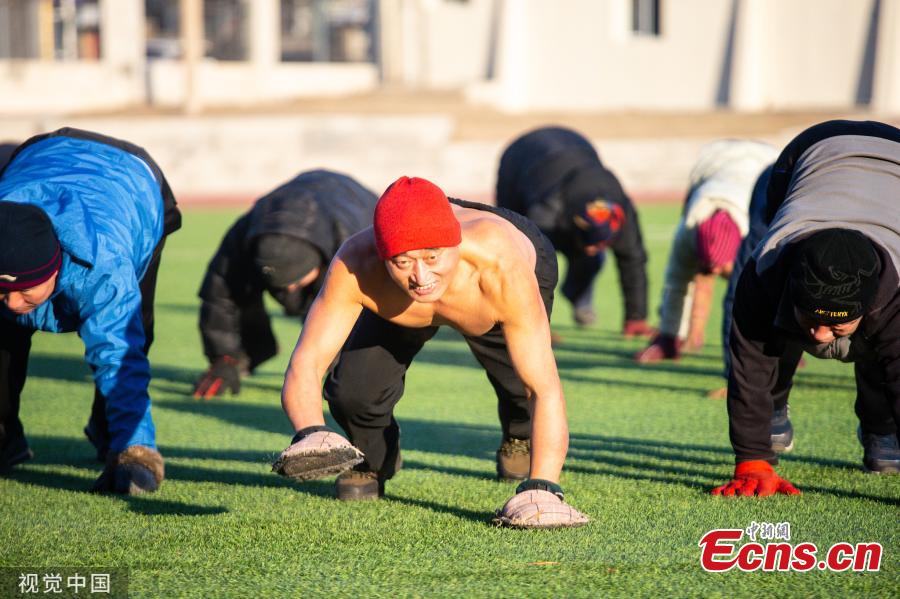 In Changchun City in Jilin Province, Mr. Wang has learned some unconventional ways to keep fit from the Internet, including crawling on the ground for a distance of approximately 400 meters a day. Wang said he has found the exercise helps his waist and shoulder feel less painful than it has in the past. (Photo/VCG) 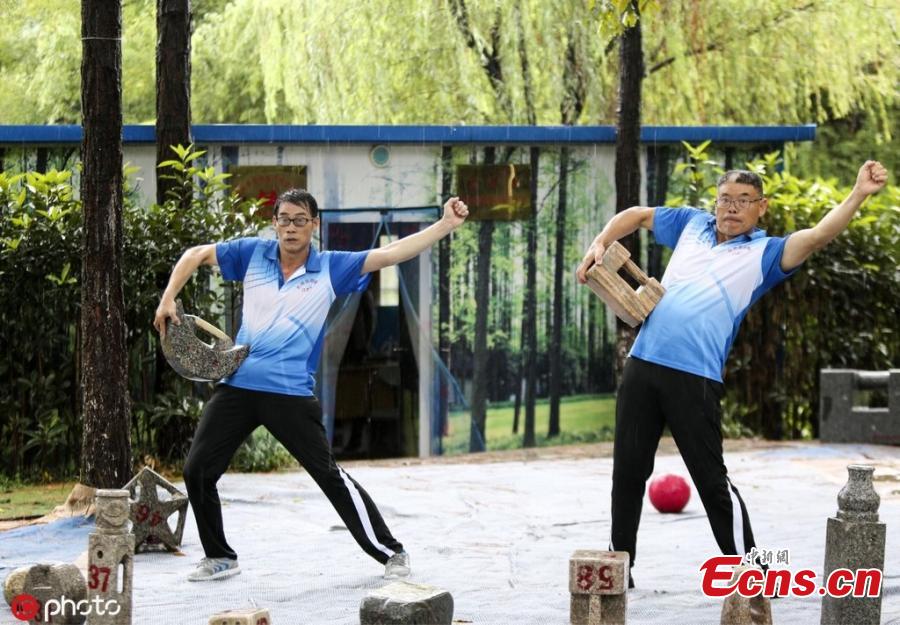 Brothers Guo Shimin and Guo Jialin are known for their passion for working out using old-fashioned padlocks in the manner of stone dumbbells in Taizhou City, Jiangsu Province. (Photo/Icphoto) 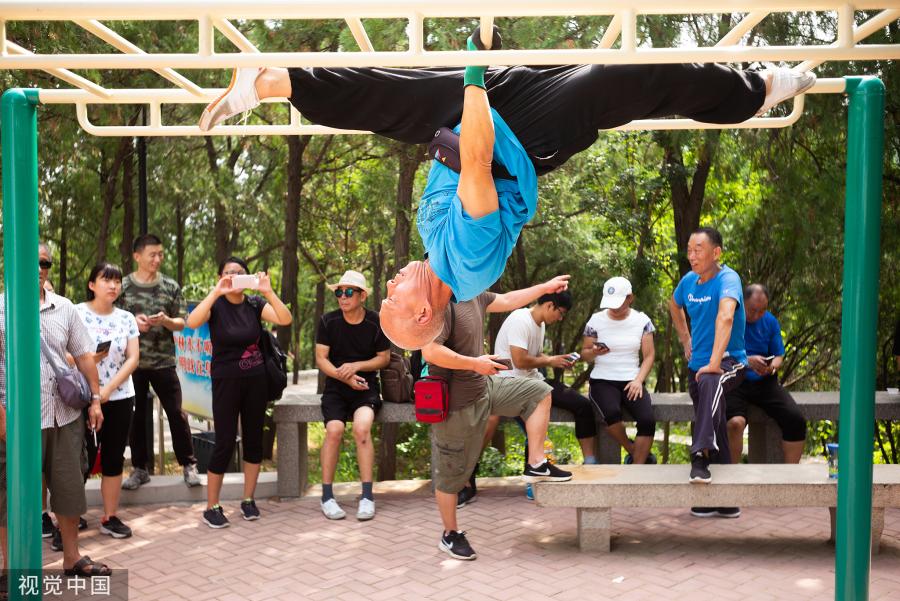 An elderly man hangs from a piece of sports equipment as a way of working out in Jinan City, Shandong Province. (Photo/VCG) 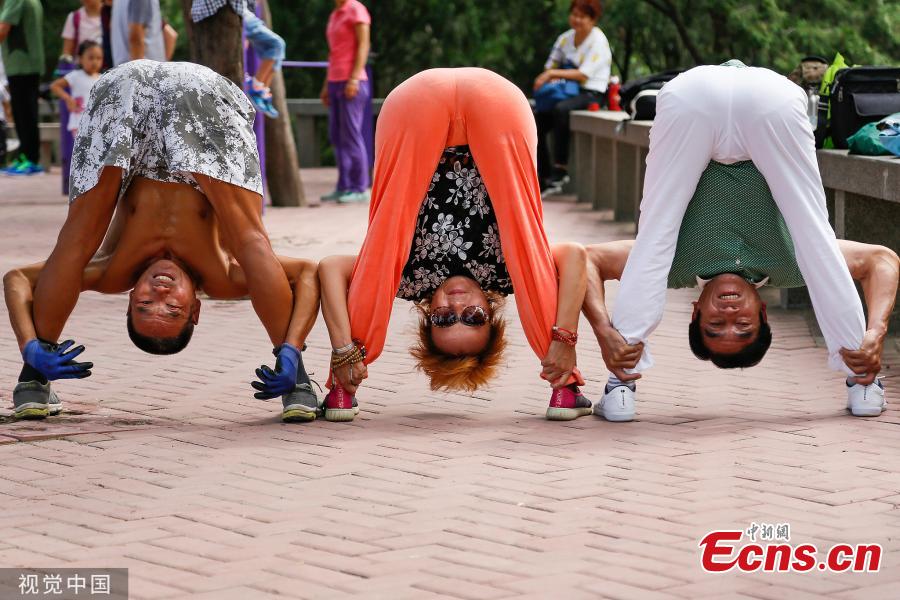 A woman joins her friends for a work out. (Photo/VCG) 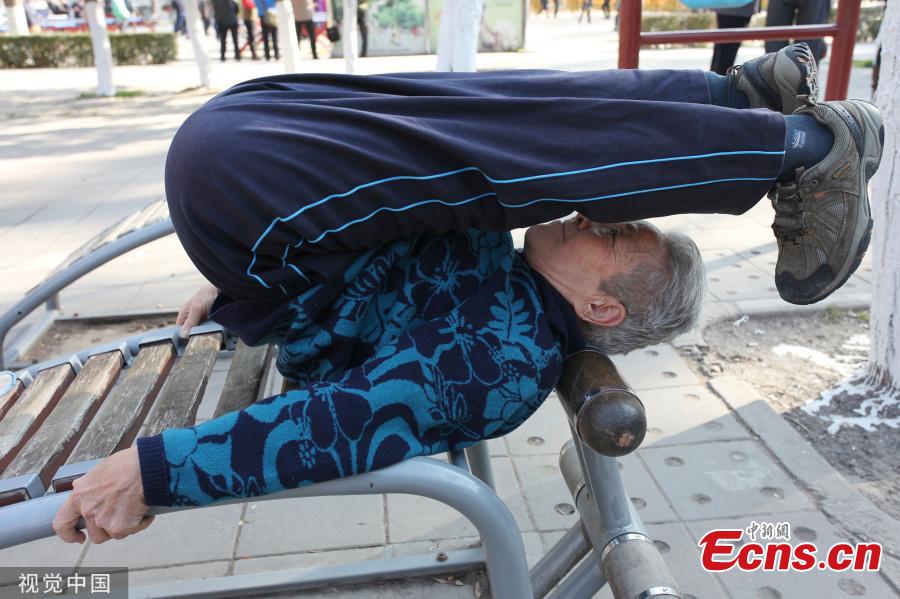 A woman surnamed Wang, who is in her seventies, works out in a park in Xi’an City, Shaanxi Province. (Photo/VCG) 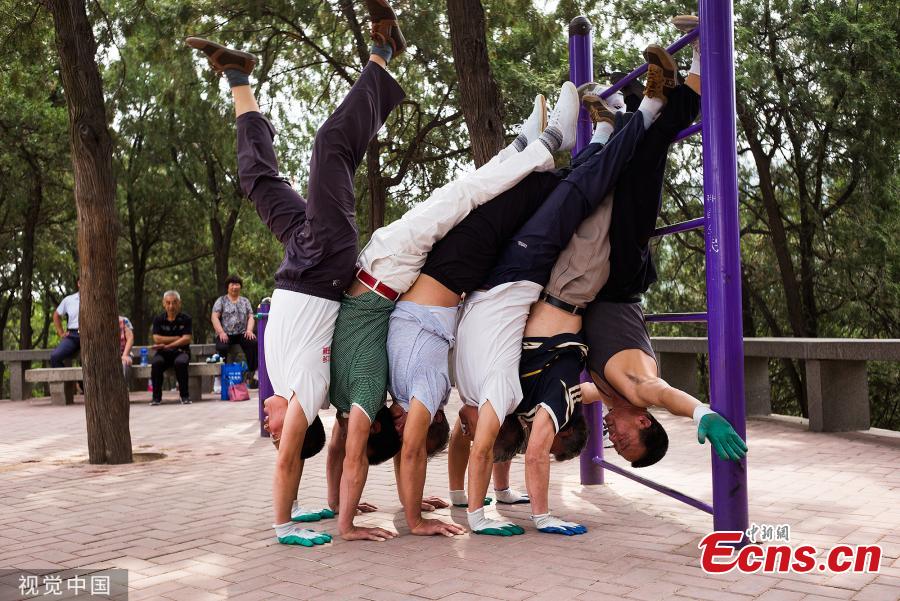 Six people stand upside down to pose for a photo. (Photo/VCG) 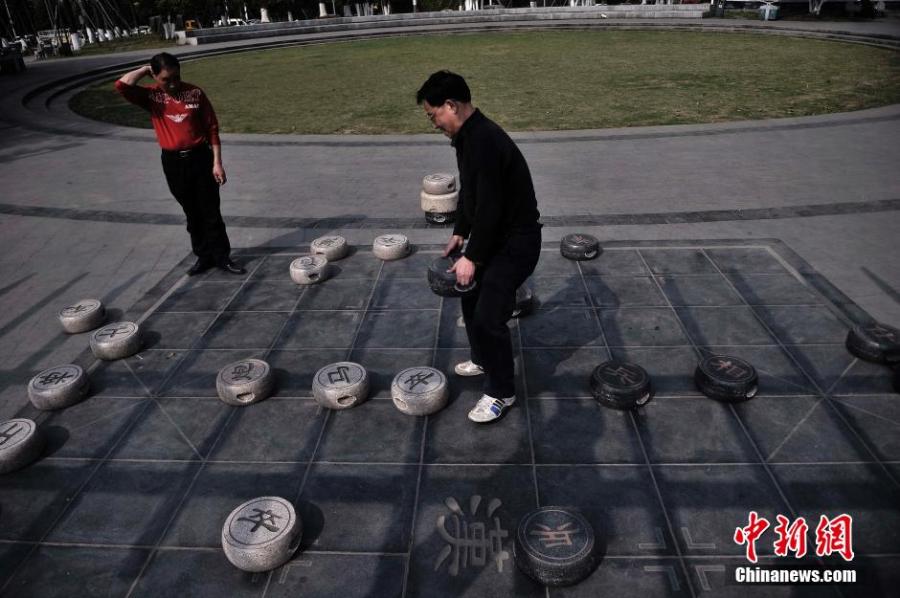 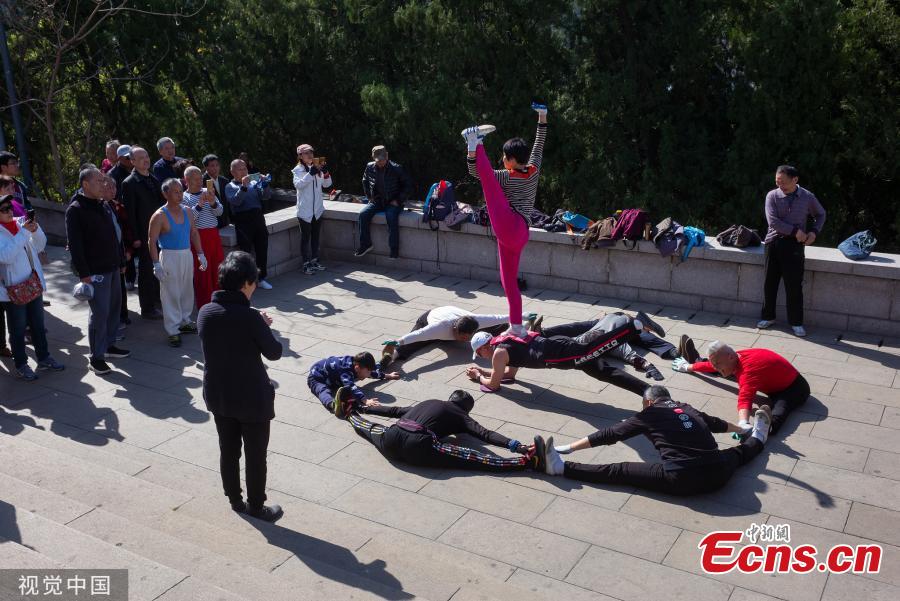