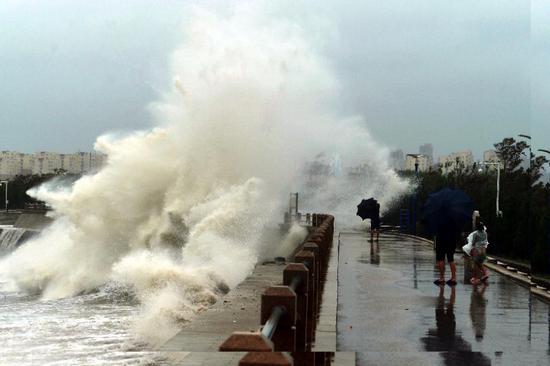 The waves beating against the bank in Qingdao, east China's Shandong Province on Aug. 11, 2019. (Photo by Wang Haibin/Xinhua)

The death toll caused by the Lekima has now risen to 44, as the super typhoon had killed 39 and left nine others missing after it battered eastern Zhejiang Province.

As of Monday morning, super Typhoon Lekima has left 39 people dead and nine people unaccounted for in east China's Zhejiang Province, according to local authorities.

Lekima has been downgraded to a tropical storm since making a second landfall by China's National Meteorological Center.

The rescue and relief work is underway.

Lekima has so far claimed 32 lives in east China's Zhejiang Province. This is the ninth typhoon of the year to hit the country and it is predicted to be one of the strongest to hit east China in years.

As of 5 p.m. Sunday, the super typhoon left 6.51 million people impacted in the provinces of Zhejiang, Jiangsu, Anhui, Shandong and Fujian as well as the city of Shanghai, according to the Ministry of Emergency Management.

Search and rescue operation is underway in the region.

As the Typhoon is moving north, strong winds have slammed northeastern China's Liaoning Province. All operations at the port of Dalian have been suspended.

As of 12:00 p.m. BJT on Sunday, at least 30 people were confirmed dead and 18 others are still missing after Typhoon Lekima made landfall in eastern China's Zhejiang Province.

More than 5.35 million people and over 180,000 hectares of crops were affected by Typhoon Lekima, local authorities said, adding that Lekima caused direct economic loss of around 2.23 billion U.S. dollars.

The death toll has risen to 28 while 20 others still remain missing after Typhoon Lekima made landfall in east China's Zhejiang Province on Saturday.

The search and rescue operations are underway, local media reported.

The Chinese Ministry of Finance and the Ministry of Emergency Management on Saturday quickly allocated 30 million yuan to support Zhejiang Province for disaster relief, according to reports.

Typhoon Lekima has killed at least 22 people in east China's Zhejiang Province, with 10 others missing as of 8:00 p.m. on Saturday, local authorities said.

The super typhoon made landfall near the city of Wenling in Zhejiang at around 1:45 a.m. BJT on Saturday, with wind speeds reaching 52 meters per second at its center, according to China's National Meteorological Center.

It is expected to move at about 15 km per hour northward and westward with abatement of wind and reach Jiangsu Province on Saturday night.

Short of time to evacuate

Those victims were killed and went missing when a typhoon triggered landslide swept through a village in Yongjia County in Wenzhou City of Zhejiang Province, a local official said.

"Torrential rain caused a landslide on a mountain that blocked a river below, trapping around 120 people in the village."

A sudden burst happened at a barrier lake formed after the landslide, with the floodwater sweeping the downstream area.

Officials said villagers didn't have enough time to evacuate to safety as the water level rose too fast, reaching up to 10 meters within 10 minutes.

Over one million people relocated

More than one million people in east China were relocated before Typhoon Lekima's landfall early Saturday.

As of Saturday morning, 253,000 people in Shanghai were relocated with part of the city's rail transit services including the Maglev train temporarily suspended.

The typhoon knocked over nearly 3,000 trees and caused faults of 100 power lines, of which 80 have been restored so far.

As the result of the super typhoon, thousands of flights and train services have been canceled in most parts of east China since Friday.

Several scenic spots including the Shanghai Disney Resort and Mount Tai in Shandong Province were also closed on Saturday as Lekima brought a heavy downpour in east China.

A nation-wide yellow alert for rainstorms has been issued by China's national weather observatory as heavy rains will sweep most parts of China from Friday to Saturday morning.