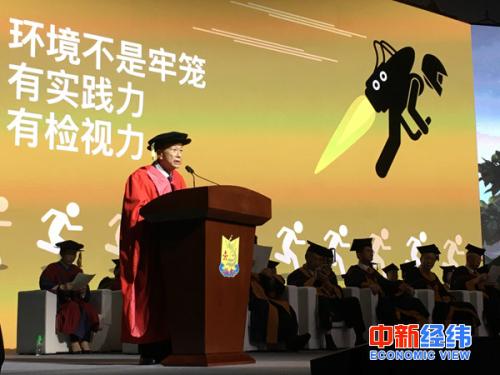 (ECNS) - Li Ka-shing, the famed Hong Kong based entrepreneur and philanthropist, has announced he will step down from his position as honorary chairman of Shantou University and asked his younger son, Richard Li Tzar-kai, to continue his mission to support education.

At the university's graduation ceremony, Li called for students to improve the world and actively respond to challenges of their generation in a speech entitled “Build myself, beyond myself.”

He also said people should not be caged by their living environment and should clarify obstacles to make impossible things possible while remaining humble.

The billionaire’s charity, Li Ka Shing Foundation, has invested almost HK$10 billion in the university established in 1981 in Guangdong. The foundation has promised to donate HK$2 billion over the next eight years to fund the university's growth.

The ceremony also marked the launch of a new building for virology studies between Shantou University and the University of Hong Kong.