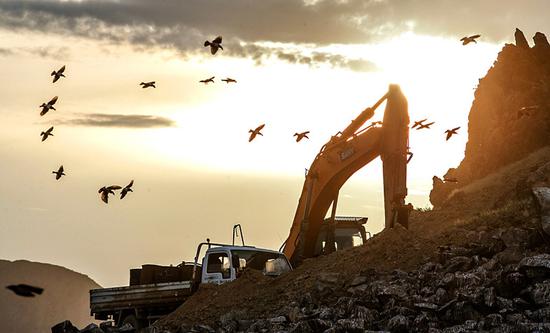 A road construction project in the Xinjiang Uygur autonomous region was suspended this week to protect the brooding of protected birds near the road.

"The construction site should remain closed until all rosy starlings finish hatching their eggs and leave," the National Forestry and Grassland Administration said on its Sina Weibo social media account on Tuesday.

The brooding birds, which have black and pink feathers, were found on gravel near an expressway under construction in Nilka county, Xinjiang, in the middle of June.

"We incorrectly thought they were just playing on the gravel at the time, so we didn't pay much attention," said chief project engineer Jiang Dongjun of China Petroleum Engineering Construction Corp, which is building the expressway.

"When we decided to start building the part where those birds were brooding on Sunday, some volunteers from a wildlife-protection organization, who were taking pictures of the birds, told us those birds are under protection," he said. "So, we contacted superior departments immediately and suspended construction that evening." 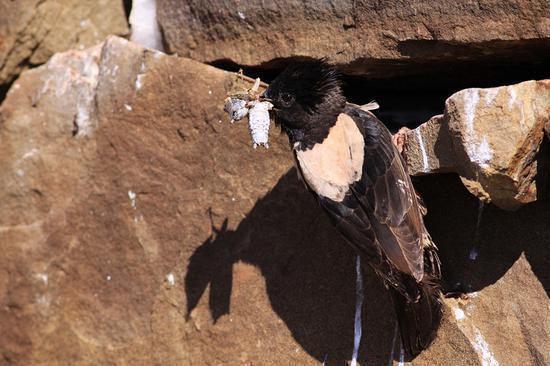 The civil wildlife conservation organization - Protecting Wilderness - is based in Xinjiang. On Monday, it posted several pictures of the birds on its social media account, calling public attention to the birds at the construction site.

"We advised the construction company to suspend work at once and restart it around July 5," said Huang Yahui, head of the organization. "It's also suggested setting up warning signs to guarantee a successful hatch."

The post on Sina Weibo was shared by netizens more than 15,730 times as of Thursday. Many also appealed to the authorities to focus on the situation.

The public comments drew the attention of wildlife authorities. The forestry and grassland administration also shared the information and announced that an inspection had been launched.

A day later, the administration said on Sina Weibo that it had ordered construction to be suspended until all the rosy starlings had finished brooding and had left the site.

There was no evidence that any birds had been killed by humans or machinery, it said.

Jiang, the engineer, said the construction plan was adjusted and warning signs have been put in place.

Ma Ming, a researcher at the Xinjiang Institute of Ecology and Geography, which is attached to the Chinese Academy of Sciences, was quoted by the Xinjiang Morning Post as saying the rosy starling is a migrating bird that has significant economic and research value.

The birds fly to some areas of Xinjiang from Eastern Europe and to central and western Asia for breeding in June and July every year, he said.

Rosy starlings eat locusts and are a major force in farmers' fight against the insects.