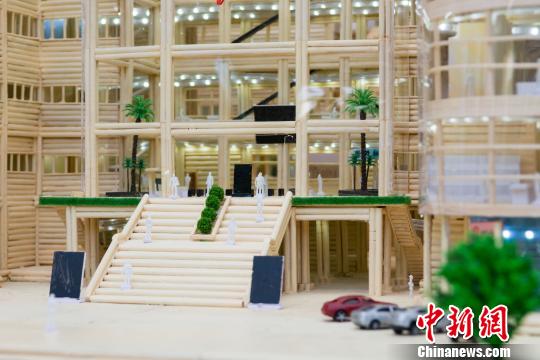 (ECNS) - A student has donated a model library made of 30,000 used chopsticks to China Three Gorges University upon his graduation.

Li Chenggui and his team spent half a year creating the intricate 1:1000 scale architectural model, as a way to express their gratitude to the university.

Li, a civil engineering student, joined four students to launch a chopstick workshop in 2016, making all kinds of models to enhance their hands-on skills and selling them to raise funds for charity.

In the second half of last year, Li spent most of his time preparing for postgraduate entrance exams in the university library. At that time, he had the idea to make a model of the library to mark his graduation.

In January, Li and his team cleaned, disinfected and dried the one-time-use chopsticks in order to build the model. Measuring 1.5 meters long, 1.2 meters wide and 60 centimeters tall, the completed model depicting both exterior and interior of the university building was presented by the seven students to the school.

“Every bookcase and table in the library is displayed according to proportion. This is the best testimony of a student's love for the library and university,” said Yang Bin, Party secretary of the library. Yang also said the gift will be kept in a special collection.