Xi: Digital economy must benefit all 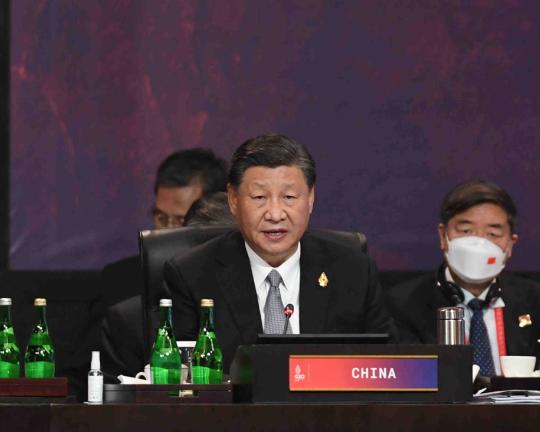 President Xi Jinping speaks at a session of the 17th Group of 20 Summit in Bali, Indonesia on Wednesday. （XINHUA）

President Xi Jinping highlighted on Wednesday the necessity for Group of 20 economies to spur the vitality of digital cooperation and bring the benefits of the digital economy to the people of all countries.

In remarks made at a session on the second and final day of the 17th G20 Summit in Bali, Indonesia, Xi stressed the importance of upholding multilateralism and beefing up international cooperation on the digital economy.

He pointed out that the growing scale of the digital economy and the accelerating digital transformation across the globe have become important factors affecting the world economic landscape.

China, while hosting the G20 Hangzhou Summit in 2016, included the digital economy in the G20 agenda for the first time and called for finding innovative ways of development and creating new growth drivers, Xi noted.

The G20 has built more consensus and stepped up cooperation on adapting to digital transformation and building the digital economy, he said.

The president called for joint efforts to foster an open, inclusive, fair, just and nondiscriminatory environment for the development of the digital economy.

International cooperation on digital industrialization and industrial digitization should be moved forward to unleash the potential of the digital economy in driving global growth, Xi said.

Actions that build "a small yard with high fences", or those that restrict or hinder cooperation on science and technology bring good to no one and are not in keeping with the common interest of the international community, he said.

Xi reiterated the need to give priority to development and close digital gaps, saying that nations should jointly promote connectivity in the digital age and adopt effective measures to improve the public's digital literacy and skills.

Greater efforts must be made to help developing nations and disadvantaged groups adapt to the tide of digitization and strive to eliminate the digital divide, he said.

China, following the launch of the Digital Silk Road initiative, sees the digital economy as a key aspect of cooperation in the Global Development Initiative, and the nation looks forward to cooperation with various parties, the president said.

Xi also said that China will continue to work with G20 members to foster a balanced, coordinated and inclusive landscape for the global digital economy that brings benefits to all and features win-win cooperation and shared prosperity, he said.

The summit ended on Wednesday, with world leaders issuing a joint declaration.

The leaders reaffirmed their commitment to cooperation to address global economic challenges. They were also committed to supporting developing countries, particularly the least-developed and small island developing states, in responding to global challenges and achieving the United Nations' Sustainable Development Goals.