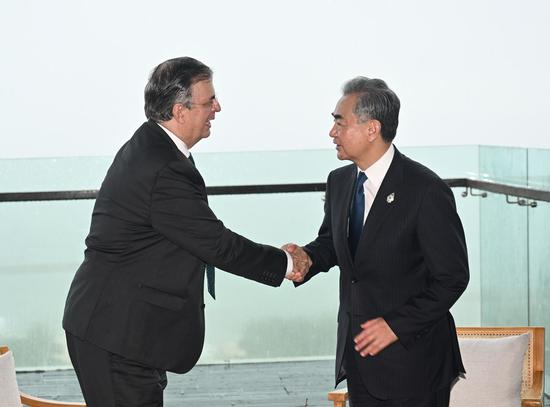 Both sides agreed to take the 50th anniversary of the establishment of diplomatic relations between the two countries as an opportunity to strengthen strategic communication and cooperation, and continuously enrich the China-Mexico comprehensive strategic partnership.

Ebrard thanked China for providing a large amount of anti-pandemic supplies and sending medical experts to Mexico, saying that the Mexican people will always remember the invaluable support.

Noting that Mexico-China friendship is a firm and clear choice of Mexico, he said that the Mexican side will continue to support China in safeguarding its legitimate rights and interests, actively promote Belt and Road cooperation, further enhance high-level mutual trust between the two countries, and deepen cooperation with China among Latin American and Caribbean countries.

For his part, Wang said China also will continue to firmly support Mexico in safeguarding its core interests, noting that both China and Mexico are independent countries and important emerging economies, and have always been respecting each other and treating each other as equals.

The two countries' relationship does not target the third party, and also goes in parallel with their respective foreign relations with others, Wang said.

He expressed the hope that the two countries will enhance the synergy of their development strategies, and expand practical cooperation in various fields.