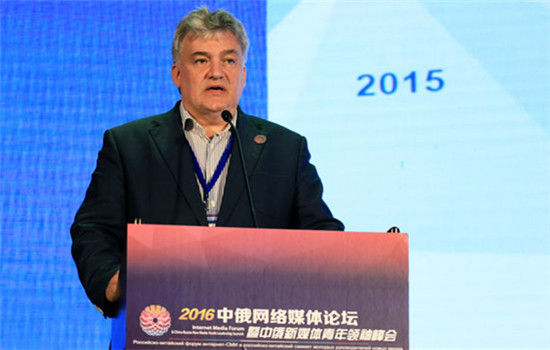 Increasing user demand and market potential drive the communication and cooperation for TV providers alongside the "belt and road" countries.

"The Belt and Road Initiatives can help in future development and collaboration between Russia and China in new media and online technologies." Kirill Philippov, director general of SPB TV, said during the China-Russia Internet Media Forum & China-Russia New Media Youth Leadership Summit held on Saturday in Tianhe district in Guangzhou.

Proposed by President Xi Jinping in 2013, the "One Belt One Road" refers to the Silk Road Economic Belt and the 21st Century Maritime Silk Road initiatives. The two initiatives aim to improve cooperation with countries in a vast part of Asia, Europe and Africa.

SPB TV, as the largest provider of end-to-end OTT TV, IPTV and mobile TV solutions in the Commonwealth of Independent States (CIS) region, started broadcasting content from China in 2013.

According to Philippov, with an existing user base that reaches more than 60 million around the globe, the company's newly-launched "One Belt One Road" OTT TV platform provides eleven live Chinese channels and on-demand video content for its audience.

The past four years saw an increase in collaborations and cooperation agreements signed between the video platform and Chinese media outlets. Philippov said that the audience's preference for Chinese TV programs tends to increase rapidly, and the number of orders has increased five times in the past two years.

"Enhancing cooperation with Chinese media is one of the most important strategic development strategies for us and our technology ability allows us to be able to protect the safety of the content," said Philippov.

Alexey Volin, deputy minister of Telecom and Mass Communications of the Russian Federation, also said that both China and Russia are paying more attention to media development and media safety.

"Russia will hold a series of events during the 2016-2017 Sino-Russian Media Exchange Year, to further promote cooperation," Volin said. "We expect more media representatives to get involved in the events to discuss how to enhance internet security and improve the quality of internet content."

In June this year, Shanghai Media Group released new strategic projects with the company and Sony Pictures Entertainment for copyrights and global distribution of Chinese films and TV series.

With the assistance of Sputnik News Agency and Radio, the China-Russia Internet Media Forum & China-Russia New Media Youth Leadership Summit is hosted by China Daily website under the guidance of the organizing committee of the Sino-Russian Media Exchange Year and the Ministry of Telecom and Mass Communications of the Russian Federation.

Themed as "development and cooperation between Chinese and Russian internet new media organizations", the forum aims to enhance people-to-people exchanges between the two countries, create an information platform for the Belt and Road countries, enable relevant enterprises to hold dialogues and further promote development in the cultural, creative and information industries of the two nations.