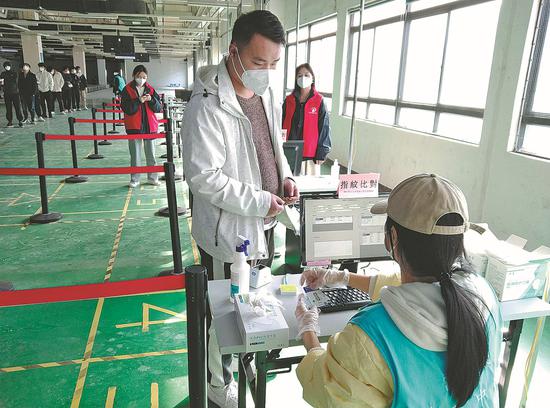 A new employee registers at the Foxconn plant in Zhengzhou, Henan province, on Thursday. (Photo/China Daily)

The Foxconn plant in Zhengzhou, Henan province, hit by a recent spate of COVID-19 infections and workers leaving the site in October and the beginning of November, has welcomed a new wave of workers to meet production during its peak period, according to reports.

The world's largest Apple iPhone assembly plant faced a shortage of hands after a lot of workers resigned due to the earlier COVID-19 outbreak. However, about 70,000 people had applied to join the company as of Wednesday, lured by increased wages and various subsidies, according to news outlet Cls.cn.

According to a recruitment advertisement released by the plant on Sunday, new employees need to be quarantined for three days before they can start. Those who are quarantined from Nov 9 to 19 will receive a payment of 1,600 yuan ($227) after they have worked for 15 days.

For workers who resigned from Oct 10 to Nov 5 and want to come back, they will be paid 500 yuan.

The first group of new workers from cities in Henan such as Zhumadian and Xinyang arrived on Sunday sent by the local government. A man surnamed Shi told Henan Daily that he was attracted by the salary. Another new employee surnamed Jin told the paper that it's not easy to find a job, and believed the epidemic situation will be eased.

New employee Ding Jingjing from Huaxian county of Anyang city, shares a three-bedroom apartment with 11 workers. She told Henan Daily that the apartment was newly renovated and that she was satisfied with the food and accommodation. Like most migrant workers, her top priority was the wage. She said she talked with her parents via video every day, and "they are not worried about me".

Another employee surnamed Liu, from Jiaozuo, Henan, told the paper that he was provided with free bedding, a towel, a toothbrush and shampoo. He said the management and epidemic control measures were good.

Huang Junwei, who is in charge of community services in Zhengzhou Airport Economy Zone where the plant is located, said there are WeChat groups where they can learn about the demands of new workers and adjust services for them.

The plant, with an area of 5.6 million square meters, has about 200,000 employees at normal times.

On Nov 10, Sun Shougang, executive vice-governor of Henan province, visited the plant compound and said the renovation of accommodation was key in resuming production and epidemic prevention and control.