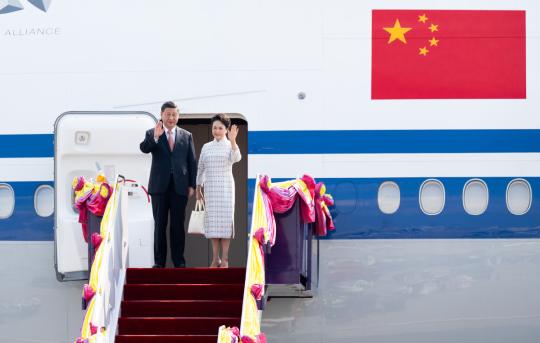 President Xi Jinping said on Thursday that the Asia-Pacific region is no one's backyard and should not become an arena for big power contests, and he called for advancing regional economic integration and building an Asia-Pacific community with a shared future.

Xi made the remarks in a written speech at the Asia-Pacific Economic Cooperation CEO Summit in Bangkok, Thailand. He arrived in the Thai capital on Thursday to attend the 29th APEC Economic Leaders' Meeting, which will be held on Friday and Saturday, and to visit Thailand.

In the speech, Xi analyzed the regional situation amid changes in the international environment, saying that the overlapping effects of intensifying geopolitical tensions and the evolution of the economic landscape have had an impact on the development environment and cooperation architecture of the Asia-Pacific region.

The Cold-War mindset, hegemonism, unilateralism and protectionism are rising, and moves to distort international norms, disconnect economic exchanges, instigate regional conflict and thwart development cooperation are often seen, Xi said. All of these have posed a grave threat to Asia-Pacific peace and development, he added.

Xi underlined the need to follow a path of peaceful development, saying that bloc confrontation solves no problems, and prejudice brings disasters.

It is because the Asia-Pacific region was freed from the shadow of the Cold War that the regional economies, particularly small and medium-sized ones, can enter the expressway toward modernization, Xi said. "No attempt to wage a new Cold War will ever be allowed by the people or by our times," he added.

Xi called for upholding openness and inclusiveness and said that openness leads to progress, while exclusiveness surely results in backwardness. Undermining the long-lasting industrial and supply chains in the Asia-Pacific region will lead regional economic cooperation to a dead end, he said. 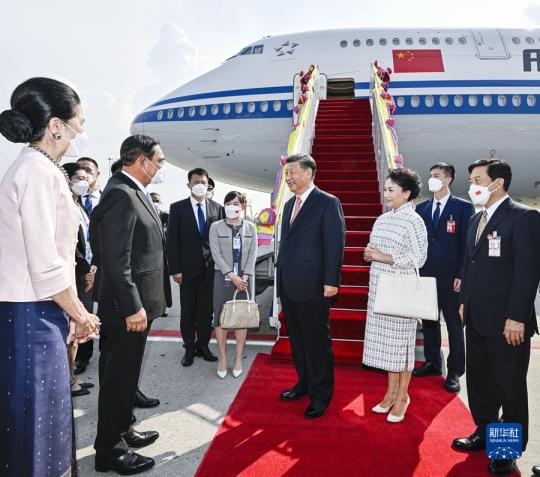 President Xi Jinping arrives at Suvarnabhumi Airport in Bangkok on Thursday to attend the 29th Asia-Pacific Economic Cooperation Economic Leaders' Meeting and visit Thailand. He and his wife, Peng Liyuan, were warmly greeted by Thai Prime Minister Prayut Chan-o-cha, and his wife, Naraporn Chan-o-cha (left), and other officials and their spouses. (YIN BOGU/XINHUA)

As regional economies face difficulties related to disrupted supply chains, strained food and energy supplies and mounting inflationary pressure, Xi emphasized the need to strengthen solidarity and enhance mutual support and assistance to enable the Asia-Pacific to be a leader in boosting global economic recovery.

In order to bolster the foundation for peaceful development, Xi called on countries to abide by the purposes and principles of the United Nations Charter, pursue the vision of common, comprehensive, cooperative and sustainable security, and jointly reject the Cold War mentality and bloc confrontation.

"We need to build an Asia-Pacific security architecture to create conditions for ensuring economic development and durable peace and stability in the Asia-Pacific," he said.

Xi called for forging a new partnership of unity and equality in the Asia-Pacific region — a partnership that will be balanced and inclusive.

Xi urged the promotion of higher-standard connectivity. "Unilateralism and protectionism should be rejected by all; any attempt to politicize and weaponize economic and trade relations should also be rejected by all," he said.

China stands ready to provide more resources for global development cooperation and work with all other parties to build a global community of development, Xi said.

Raymund Chao, chairman for the Asia-Pacific region and China of professional services provider PwC, said Xi's proposal for advancing more inclusive and resilient global development with benefits shared for all is greatly important and positive in promoting world economic recovery, stability and growth.

Ukrist Pathmanand, director of the Mekong Research Center of the Institute of Asian Studies at Bangkok's Chulalongkorn University, said Xi's idea for greater Asia-Pacific regional economic integration is important, as the region needs a quick socioeconomic recovery from the COVID-19 pandemic.

He said that Xi's speech aligns with Thailand's Bio-Circular-Green national strategy, and he noted that the BCG economic model is an overarching theme of this year's APEC meeting.