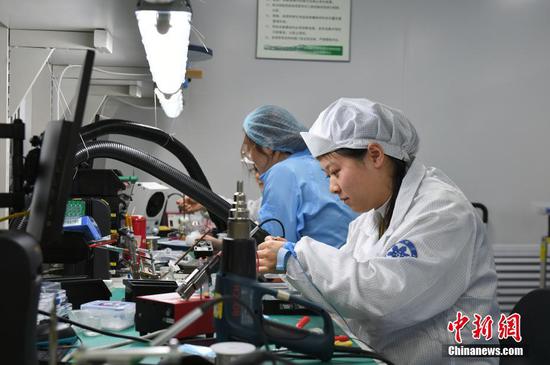 (ECNS) -- Gender parity in scientific research has gradually improved in China, with women gaining in academic influence, said a report published during the Fifth World Laureates Forum held in Shanghai on Nov. 6 and 7.

The report was jointly published by the National Science Library of Chinese Academy of Sciences and ELSEVIER, a global leader in information and analytics.

Accordingly, the gender gap in scientific research is being narrowed in China, especially in the fields of life science and medicine.

Combining paper data from the Scopus database of ELSEVIER, the report made an analysis of scientific research output among more than 160,000 Chinese researchers during 2005 through 2019 and studied the status of female researchers in academic influence, research field, their role in research, cooperation, fund application, etc.

Compared with 2005-2009, the proportion of men and women in all disciplines has decreased significantly from 2015 to 2019, with life sciences and medicine seeing the narrowest gender gap.

In addition, the academic influence between male and female is not obvious. For instance, from 2015 to 2019, the impact index score of male papers was 1.22, while that of female papers was 1.13, a slight difference, showing that female scientific research achievements enjoy roughly the same attention as that of men.

Concretely, women perform better in the fields of life science and medicine than other fields, especially in neuroscience and pharmacology. However, their influence is not as good as male researchers in fields like material science, computer science and engineering technology.