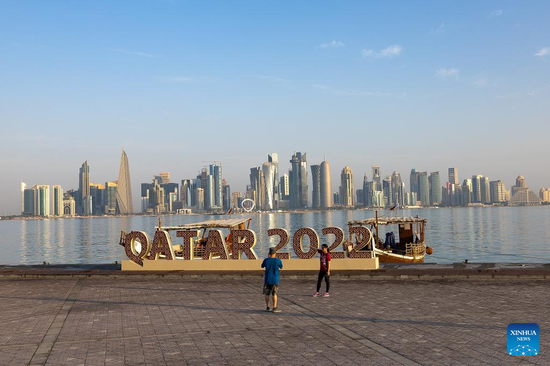 People take photos with a FIFA World Cup 2022 installation near the Doha Corniche in Doha, Qatar, on Nov. 11, 2022. (Photo/Xinhua)

(ECNS) -- The World Cup Qatar 2022, which is about to begin in November, will be the most expensive FIFA tournament in history, with a total cost of about $220 billion.

Since 2010 when the Gulf state Qatar was awarded the bid to host the World Cup, it has been elaborately planning an infrastructure network to serve the world-level FIFA tournament.

Reports show that costs associated with Qatar’s new stadiums range between $6.5 billion to $10 billion, a significant increase from the proposed four billion U.S. dollars in the initial bid.

The remaining cost was used for the broader Qatar 2030 plan, which focuses on developing infrastructure, including an innovation hub with hotels, a sophisticated metro network, and airports.

To welcome the World Cup, Qatar has built a new city, Lusail City, which is renowned as “the City of Football.” Lusail stadium will serve as the main venue with a capacity of 80,000 people.

FIFA has allocated $440 million as prize money for the tournament, a $40 million increase from the 2018 edition.

The opening match will kick off on Nov. 20 and feature 32 teams and attract more than 1.2 million visitors to the city, reports Al Jazeera.

Qatar, with a population of just 2.8 million, is one of the world’s wealthiest countries. Petroleum is a major source of its vast wealth.