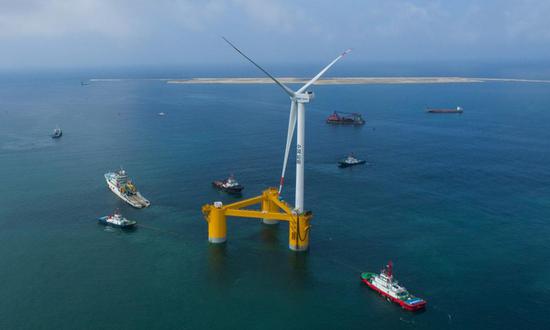 The project, constructed by China General Nuclear Power Group (CGNPC) in Shanwei, Guangdong, is China's first affordable offshore wind power project that has achieved grid-connected power generation with a full capacity, per the report, adding that the project also marks the first mega-kilowatt offshore wind power base in eastern Guangdong officially completed and put into operation.

The project can generate about 1.5 billion kilowatt-hours (kWh) of clean electricity every year, as it can reduce the consumption of standard coal by about 460,000 tons and the emission of carbon dioxide by about 1.2 million tons, equivalent to planting about 3,400 hectares of trees after the project enters full operation.

Wang Dapeng, a senior official from the National Energy Administration, said on Monday that in the first three quarters of 2022, the power generation of the country's renewable green energy reached 1.94 trillion kWh, with wind power generation standing at 544.1 billion kWh, up 15.9 percent year-on-year.