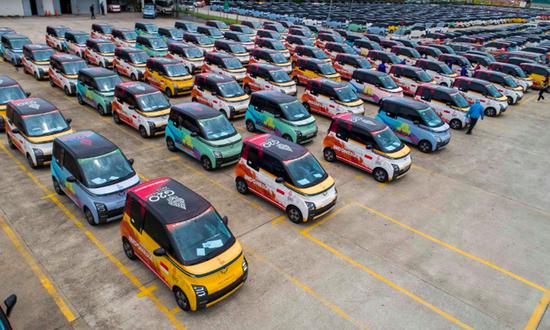 300 China-made EV unveiled at the G20 Summit in Indonesia as official vehicles. (Photo/courtesy of SAIC-GM-Wuling Automobile)

300 China-made new-energy vehicles from Chinese car maker SAIC-GM-Wuling Automobile were unveiled at the G20 Summit in Indonesia as official vehicles, demonstrating the strength of intelligent manufacturing in China.

Air ev, a new energy model under SAIC-GM-Wuling Automobile was appointed as the official vehicle of the G20 Summit to provide high-quality travel service for the G20 summit delegation and organizing committee, the company said in a statement told the Global Times on Sunday.

"We will see more Air ev shuttling in Bali, and we hope Wuling will become an important part of the ecological development of electric vehicles in Indonesia," Pratikno, Minister of State Secretariat of Indonesia said at the delivering ceremony in October.

In 2017, SAIC-GM-Wuling Automobile established a company in Indonesia, becoming the first Chinese auto company to invest and set up a factory in the country to export intellectual property rights, brands and products, human resources and teams, business operations and models of Chinese auto industry, the Securities Times reported.

In 2021, the total export volume of SAIC-GM-Wuling exceeded 140,000 units/sets, with a year-on-year growth of more than 80 percent, covering more than 40 countries and regions.

The showcase of Chinese-made vehicles at the platform of G20 is expected to further promote Chinese vehicle companies to develop the overseas market, according to experts.

Chinese automakers are accelerating efforts to sell their vehicles abroad with China auto exports hitting a record high in October, data from Association of Automobile Manufacturers (CAAM) showed on Thursday.

The exports of vehicles from China increased 12.3 percent from September to 337,000 units in October, increasing 46 percent from the previous year, CAAM data showed.