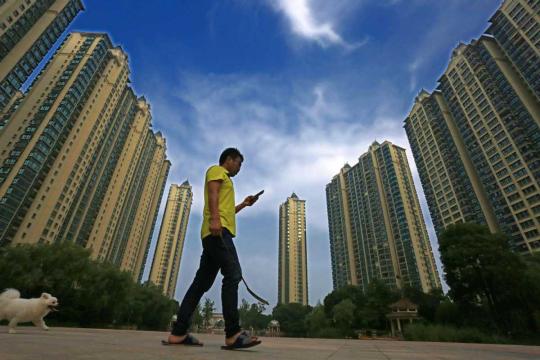 A pedestrian walks past a residential enclave in Huaian, Jiangsu province, on July 28. (Photo by Zhou Gangguo/For China Daily)

China has urbanized at a rapid pace since the founding of New China in 1949, especially in the past 40 years. Seventy years ago, China's urban population accounted for only 10.6 percent of the total, much lower than the global average of 29 percent at that time.

Since 1996, China's annual newly increased urban population has exceeded 20 million. In 2014, a new type of urbanization policy replaced the concept of simply pursuing rapid urbanization with a people-oriented urbanization concept based on the integration of urban and rural infrastructure and equalization of public services.

As a result, China's urbanization has entered a high-quality development stage. The 2019 Government Work Report and the key tasks of a new type of urbanization issued by the National Development and Reform Commission further emphasize the significance of promoting high-quality urbanization.

In the initial years of New China, the dual structure of urban and rural areas impeded the development of rural areas, and the income gap between rural and urban residents was much wider than in developed countries. But China's rapid urbanization has broken the urban-rural boundary of factor market, promoting the free flow of development factors and narrowing the gap between rural and urban areas.

The continuous increase of residents' income and consumption expenditure shows Chinese people's living standards have greatly improved thanks to the urbanization-induced changes.