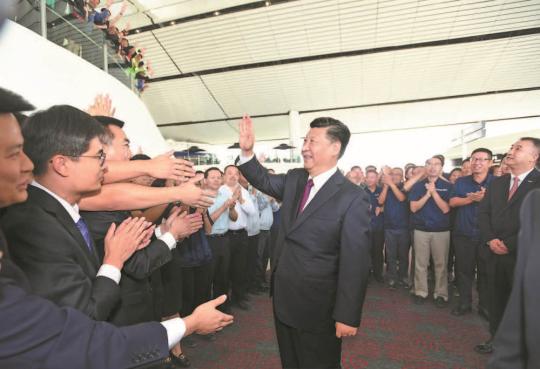 The Communist Party of China and the Chinese people possess the ambition and confidence to make continuous efforts for the fulfillment of national rejuvenation, President Xi Jinping said on Wednesday.

Xi, also general secretary of the CPC Central Committee and chairman of the Central Military Commission, announced the official opening of Beijing Daxing International Airport, the world's largest single-terminal airport, at the facility in the capital's southern Daxing district.

China will definitely achieve its goal of national rejuvenation, Xi said, adding that the people are the cornerstone of the country's development.

The president took a subway to the new airport, attended the opening ceremony and then spoke with representatives of workers who helped build the facility, along with employees.

"We are confident, and we have the ambition to work hard and march forward step by step," he told the workers.

The completion of the airport in less than five years fully demonstrates China's capability in engineering and construction, shows the nation's strength and proves the political advantage of the CPC's leadership and the socialist system, Xi said.

Beijing will also continue to develop its railway network, which is an effective way to address transportation problems in big cities, Xi said at Caoqiao subway station.

Xi told workers in Daxing to build the new airport into a world-class aviation hub, demonstrate Chinese people's wisdom and strength to the world and display China's openness and inclusiveness.

At the opening ceremony, the Civil Aviation Administration of China awarded the airport its operating license.

The new airport, located 46 kilometers south of downtown Beijing, is designed to take pressure off the overcrowded Beijing Capital International Airport in the city's northeast.

Xi's presence at the ceremony demonstrated the great attention the president pays to the coordinating development of the Beijing-Tianjin-Hebei cluster, said Cai Qi, Party secretary of Beijing.

A video released at the ceremony said that the new airport is a "project that is directly planned and promoted by General Secretary Xi Jinping". It is a new gateway of China that displays the rise of the country and national rejuvenation, it said.

In February 2017, Xi paid a visit to the construction site of the new airport and stressed that the project is a new engine of the country's development.