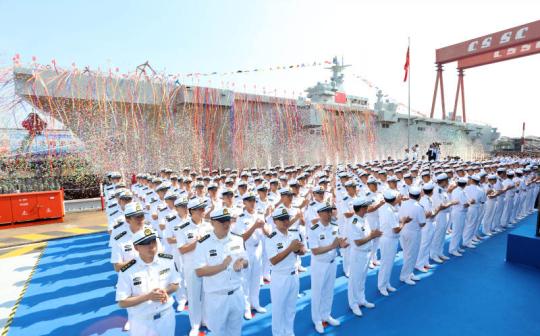 The People's Liberation Army Navy said in a statement that after a brief ceremony at an unidentified shipyard, water was pumped into the dry dock where the ship's hull was built, signifying that its major structure had been completed.

Participants at the ceremony — officials from the central and Shanghai governments, officers from the Central Military Commission's Equipment Development Department and the Navy, executives of State-owned conglomerate China State Shipbuilding Corp as well as the vessel's designers and construction workers — applauded as they witnessed the launch, the statement said.

The ship, whose name remains unknown — the military usually makes a warship's name public at its commissioning ceremony — was domestically developed and built, the Navy said. It will be capable of conducting amphibious combat and other tasks.

In the next phase, the Navy said, engineers will start outfitting and fine-tuning the vessel's equipment and then conduct mooring tests and sea trials.

Observers familiar with the Navy's hardware have pointed out that the new ship is the first among Type 075-class amphibious assault ships.

Foreign media reported it is being built at Hudong-Zhonghua Shipbuilding, a major builder under the China State Shipbuilding Corp.

Science and Technology Daily previously reported that the vessel will be about 250 meters long and 30 meters wide, and it will displace nearly 40,000 metric tons.

He said deployment of the Type 075-class vessel will extensively enhance the Navy's amphibious operational capability.

"Though we now have Type 071-class amphibious transport dock ships, they can only carry a limited number of helicopters that are far from enough for massive amphibious landing operations. By comparison, the Type 075 will be capable of carrying dozens of helicopters and a stronger force of landing craft, allowing the Navy to execute low-altitude, over-the-horizon deployment of a large number of troops," Cui said.

Cao Weidong, a senior researcher at the PLA's Naval Research Academy, said the Type 075-class ship will mainly be tasked with transporting and landing troops and weapons in hostile territory via landing craft or helicopters, as well as providing air-fire support.