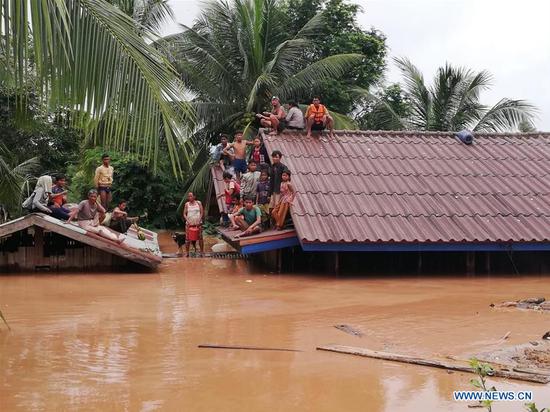 Villagers are seen stranded on rooftops of houses after an under-construction dam collapsed in Attapeu, Laos, on July 24, 2018. (Xinhua/Vilaphon Phommasane)

At least two people are confirmed dead as of 4:30 p.m. local time (0930 GMT) on Tuesday, and a number of villagers are still missing after an under-construction dam collapsed causing flash flood in southern Laos, state-run online newspaper Vientiane Times quoted a senior provincial official as saying.

The the Xepian-Xe Nam Noy hydropower dam collapsed on Monday night. Video clips and photos on social media showed flood-water levels going up to the ceiling, forcing villagers and animals to seek shelter on rooftops.

"Villagers have sought shelter on their roofs, and some climbed up trees to escape the flood waters," an official of the provincial rescue operation board said on condition of anonymity.

Helicopters and boats have been deployed for the rescue operation to search for the missing, district governor Bounhome Phommasane told Vientiane Times on Tuesday.

Some people have been rescued and are sheltering at the facilities of the district's main municipality.

Rescuers are battling with time as the water level is poised to rise, the governor said, adding that the number of affected villages are likely to grow.

Moderate and heavy rains with strong winds are forecast for some areas in central and southern provinces in the coming days, which could worsen the situation, the Lao Meteorology and Hydrology Department warned.

The cabinet has entrusted the Ministry of Labor and Social Welfare in collaboration with the Ministry of National Defence and Attapeu provincial authorities to urgently appoint an Ad Hoc Committee to mobilize aid and relief supplies to help the victims.

Being constructed by Xe Pian-Xe Namnoy Power Company (PNPC), a joint venture of South Korean, Thai and Lao companies, the Xe Pian-Xe Namnoy hydroelectric power project is estimated to coast 1.02 billion U.S. dollars, and to have an annual electricity generation of approximately 1,860 GWh.

Feasibility study for the hydroelectric project was completed in November 2008. Construction of the project began in February 2013 and commercial operations are expected to begin in 2018.