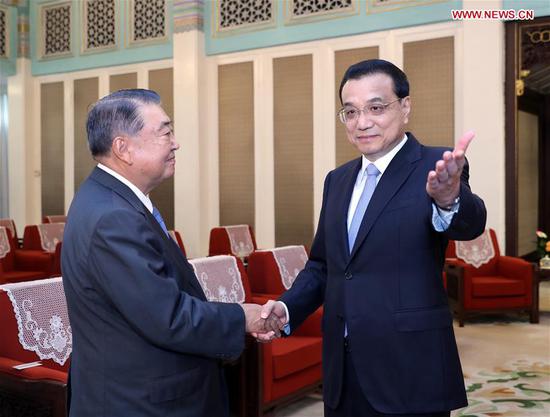 Chinese Premier Li Keqiang on Tuesday met with Tadamori Oshima, speaker of the House of Representatives of the Japanese parliament, calling for a healthy and stable bilateral relationship.

"Healthy and stable China-Japan ties are beneficial to the two countries and their peoples, as well as regional and global peace, stability and prosperity," Li said.

This year marks the 40th anniversary of the signing of China-Japan Treaty of Peace and Friendship. Li said both sides should follow the four political documents signed between the two countries and implement their consensus to promote bilateral ties along the right track.

As major economies in the world, China and Japan are also the beneficiaries of free trade. The two countries should safeguard multilateralism, and advocate rules-based international order and free trade system, he said.

"China will continue its opening-up, relax market access and welcome foreign companies, including Japanese companies to expand their cooperation with China," Li said, adding that China is willing to work with Japan to strengthen cooperation in innovation-driven development and third-party markets.

He also called for more parliamentary exchanges to enhance understanding and mutual trust.

Oshima said Japan is willing to promote bilateral ties by "following the four political documents signed between the two countries and in the spirit of taking history as a mirror to guide the future."

"The Japanese side is willing to work with China to strengthen exchanges between legislative bodies to promote a steady development of bilateral ties," Oshima said.

Wang Chen, vice chairman of the Standing Committee of the National People's Congress (NPC), also met with Oshima on Tuesday.

Wang said the legislative organs of the two countries could deepen cooperation to facilitate culture, youth and people-to-people exchanges in order to consolidate public support for bilateral ties.

Oshima said the House of Representatives of the Japanese parliament is ready to work with the NPC to play a role in developing Japan-China relations.