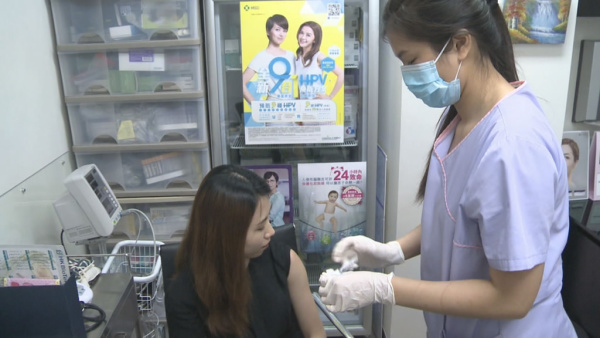 Many Chinese mainlanders choose to head to Hong Kong for their HPV vaccine shots. /CGTN Photo

Demand for the HPV vaccine that prevents the onset of cervical cancer continues to grow in China, particularly after two early versions of HPV vaccines were introduced to the Chinese mainland in mid-2017.

China’s State Drug Administration confirmed at the beginning of May that they have handed U.S. drugmaker Merck's latest HPV vaccine Gardasil 9 a conditional green light, granting it market access on the Chinese mainland.

But before the 9-valent vaccine is available in the Chinese mainland market, many women and girls are still choosing to head to Hong Kong for their shots, bringing huge challenges to the region’s vaccine market.

Dabby Lo from Hong Kong’s BIB Health Care Center told CGTN that her center sees more and more mainlanders coming to HK to get the Gardasil 9 shots. She believes that one reason is that the vaccines currently available on the mainland are 2-valent and 4-valent while Hong Kong has an upgraded version, the 9-valent.

The Gardasil 9 vaccine targets human papillomavirus or HPV, a sexually-transmitted infection linked to the onset of cervical cancer and cuts down 90 percent of infections, while the two vaccines available on the Chinese mainland are GlaxoSmithKline's Cervarix 2 and Merck’s Gardasil 4, which are believed to target at least 70 percent of all cervical cancer cases.

Some vaccine clinics in Kowloon are temporarily closed due to lack of HPV Vaccine. /CGTN Photo

Growing demand has driven up prices.

One needs to pay up to 10,000 Hong Kong dollars or around 1,200 US dollars for the three shots of the Gardasil 9 vaccination, almost triple from two to three years ago. And that's not counting travel expenses.

Yet having the money is no guarantee you’ll get the vaccine right away. The Hong Kong market is struggling to get enough. The sole producer of Gardasil 9, US drug maker Merck, halted supply to the region early in May for an unspecified period.

CGTN finds that some vaccine clinics in Kowloon are temporarily closed. They have sent messages to clients saying they have no vaccines in stock and shots scheduled for May and June have been suspended until further notice, and telling Chinese mainland clients to withhold booking trips to Hong Kong.

That could pose a problem for some vaccine receivers, as vaccination series suggest all three shots should be done within six months or one year at the most. Otherwise the first one or two shots taken would be wasted.

Dabby suggested that people from the mainland should reconsider before going to Hong Kong as community hospitals on the mainland could offer similar and more cost-effective vaccines.

With Merck’s 9-valent HPV vaccine getting fast-track approval, it’s expected to be available in China in early 2019.

Meanwhile, according to Xinhua News Agency, Chinese drug companies are working on their own vaccine for HPV, which should be available by 2022.