The world joins Britain in celebrating the royal wedding 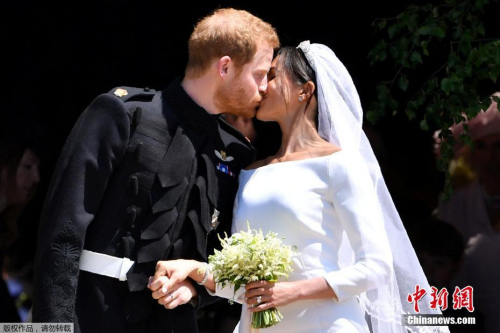 Britain's Prince Harry (L) and Meghan Markle (R) kiss as they exit St George's Chapel in Windsor Castle after their royal wedding ceremony, in Windsor, Britain, May 19, 2018. The couple have been bestowed the royal titles of Duke and Duchess of Sussex on them by the British monarch. (Photo/China News Service)

The royal family has thanked everyone who traveled to Windsor for the wedding of Prince Harry and Meghan Markle — the Duke and Duchess of Sussex — and congratulated the newlyweds following their union on Saturday.

Tens of thousands lined the streets of the market town to the west of London to celebrate the nuptials. Many managed to get a glimpse of the couple as they made their way around Windsor town center and along the iconic Long Walk during the carriage procession after the ceremony.

In a Twitter message, the royal family also thanked those who followed the wedding from the UK, the Commonwealth, and around the world.

Two hundred of the couple's closest family and friends went on to celebrate the occasion at an evening black-tie reception hosted by Prince Charles at Frogmore House, which is near Windsor Castle.

The bride changed into a white Stella McCartney halter-neck silk crepe gown for the private reception.

Earlier, in what was described as a moving ceremony, Prince Harry could be seen telling Markle, "You look amazing," when he first saw her after she walked down the aisle at St Georges's Chapel, which is in the grounds of Windsor Castle.

Markle's wedding dress was kept under wraps until she emerged from her car upon arrival at the chapel.

She wore a white boat-neck dress by British designer Clare Waight Keller, who is artistic director at the French fashion house Givenchy.

The bride also had on a diamond bandeau tiara, which was loaned to her by the queen and which was originally worn by Prince Harry's great-great-grandmother, Queen Mary.

Her five-meter silk veil was embroidered with flowers representing each country in the commonwealth.

Prince Harry and his best man, his brother Prince William, the Duke of Cambridge, both wore the frockcoat uniform of the Blues and Royals.

Prince Charles walked Markle down the aisle after her father was unable to attend the wedding because of ill health.

The couple exchanged vows and rings in front of 600 guests, including the queen and members of the royal family as well as famous faces such as tennis star Serena Williams, Victoria and David Beckham, Elton John, and George and Amal Clooney, as well as Markle's co-stars from the TV series Suits.

Under a clear blue sky and glorious sunshine, the couple kissed on the steps of St George's Chapel and left Windsor Castle in a horse-drawn carriage for a procession watched by tens of thousands of well-wishers who had crammed into the streets of Windsor hoping for a glimpse of the newlyweds.

Many waved British flags and cheered as the carriage passed by. Royal fans were not disappointed.

Lindsay Hainer, 37, said: "That was absolutely glorious. It really was. It was beautiful, to be part of history. To see that up close like that, she was absolutely radiant, she was sparkling, Harry just looked so happy."

Donna Werner from the United States said: "I just don't know what I'm feeling. Watching the ceremony was unbelievable. She was so beautiful and elegant and regal."

The royal family will pay for the wedding, which includes the service, music, flowers, decorations, and the reception.

Harry and Meghan will carry out their first official engagement as husband and wife on Tuesday.