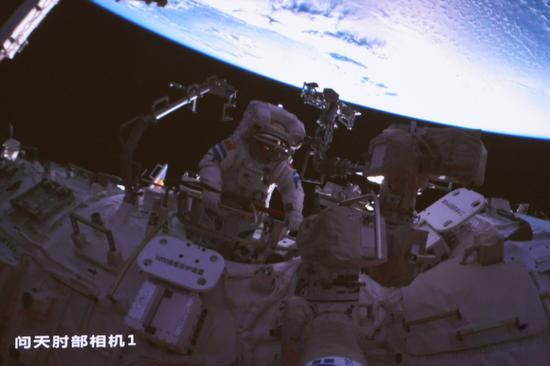 The Shenzhou XIV crew on board the orbiting Chinese Tiangong space station conducts their extravehicular activities for the third time, Nov 17, 2022. (Photo/Xinhua)

The Shenzhou XIV mission crew on board the Tiangong space station completed its third spacewalk on Thursday afternoon, according to the China Manned Space Agency.

The agency said in a news release that mission commander Chen Dong and crew member Cai Xuzhe opened a hatch at 11:16 am and floated out of the Tiangong station. Another crew member, Liu Yang, stayed inside the station to provide technical support, it added.

Li Xuedong, a structural designer of the space station at the China Academy of Space Technology in Beijing, said that it is quite difficult for astronauts to move between station modules on a spacewalk so the inter-module connection devices will act like bridges that give a lot of convenience to the crew.

The pair also adjusted the Wentian lab module's external panoramic camera and installed a handle on the station's minor robotic arm, according to the release.

This was the first spacewalk by Chinese astronauts since the Tiangong's in-orbit assembly was recently completed. The operation verified the combined robotic arm's capability to support astronauts and the Wentian lab module's performance during the spacewalk, said the agency.

The crew arrived at Tiangong on the evening of June 5, several hours after their spacecraft was launched from the Jiuquan Satellite Launch Center in the northwestern Gobi Desert. They are scheduled to continue orbiting with the station until early December, when the Shenzhou XV crew will take over.

Currently, the Tiangong station consists of the Tianhe core module, the Wentian and Mengtian lab modules, the Shenzhou XIV spacecraft used to transport the astronauts as well as the newly arrived Tianzhou 5 cargo ship.

With an overall weight of nearly 70 metric tons, Tiangong is one of the largest space-based infrastructures mankind has built and deployed in outer space. It is expected to operate in a low-Earth orbit about 400 kilometers above the ground for about 10 years and will be open to astronauts from other countries in the near future, space officials have said.