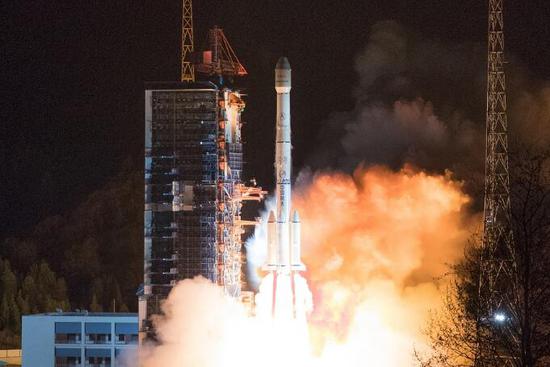 China lifted into space a Long March 3B carrier rocket early Sunday morning to place a communications satellite into a geostationary orbit, marking the 300th launch in the Long March family.

The 19-story-tall rocket blasted off at 0:28 am at the Xichang Satellite Launch Center in Southwest China’s Sichuan province, ripping apart the night sky with its orange-red flame and echoing thunder, a video published by China Aerospace Science and Technology Corp in Beijing, maker of the Long March series, showed.

The mission was announced as a success about one hour after liftoff as the satellite’s solar arrays unfolded in orbit, according to the State-owned space conglomerate.

China launched its first carrier rocket – a Long March 1 that was a de facto modified ballistic missile –in April 1970 to send its first satellite, Dongfanghong 1, or East Red 1, into space.

Since then, the country has developed and built 17 types of Long March rocket; five of them have retired. The Long March family has comprised nearly 97 percent of the nation’s total launch missions, leaving a very small proportion to other series, such as the Kuaizhou.

In the 300 liftoffs, 197 were carried out by models developed by the China Academy of Launch Vehicle Technology in Beijing, and 103 by the Shanghai Academy of Spaceflight Technology.

“It took 37 years for the Long March family to perform 100 launches. The next 100 launches used seven years,” he said. “By comparison, the third 100 launches were made in the past four years.

Li noted that in the early years of China’s space industry, engineers took several months to build and check a rocket before its flight and they could produce only a handful of rockets each year. Now, the nation can construct and launch 40 rockets annually.

In 2018 alone, China made 39 orbital launches, exactly the same number of the nation’s total space missions in the entire 1990s, marking the first time China has launched more rockets into orbit than any other country in a year. Among them, 37 were done by Long March models.

He also added that the Long March 1 was able to carry only 300 kilograms of payload, which just allowed the lift of a small satellite. After developments over the past nearly half-century, the Long March 5, the biggest and strongest in the family, is capable of carrying as much as 25 metric tons of payload, earning it the honor to transport the nation’s first manned space station into orbit.