Highlights of news conference of the Ministry of Commerce 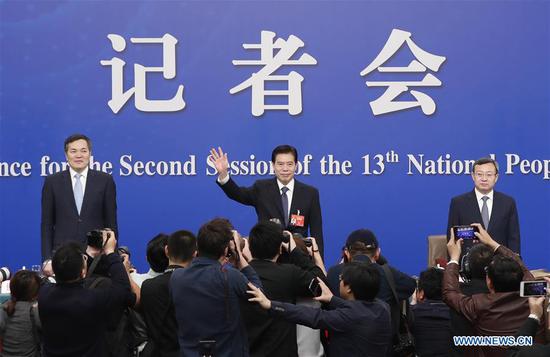 Here are the highlights:

Hope is rising for the Sino-US trade talks as both negotiation teams are trying their best to turn the consensus reached between both countries' leaders into reality, according to the Ministry of Commerce on Saturday.

Tariff hikes do no help any parties, Wang Shouwen, vice-minister of commerce, told a press conference during the two sessions on Saturday.

A mutually beneficial agreement between China and the United States will meet both countries' interest and also the whole world's expectation, Wang added.

Govt to roll out policies to boost social consumption

The country will upgrade a number of pedestrian streets, optimize the layout of convenience stores, and encourage brand development and franchising.

The nation will also promote service consumption and optimize service supply, especially in weak areas such as senior services and housekeeping services.

China's investment environment is expected to become more stable, open and transparent, as the draft foreign investment law stipulates foreign enterprises will receive pre-established national treatment plus a negative list management system, according to the Ministry of Commerce on Saturday.

The foreign investment law is expected to help establish an environment where foreign companies can compete fairly in China, and better protect the legitimate rights and interests of foreign investors, Wang Shouwen, vice-minister of commerce, said at a news conference during the two sessions.

Wang also cited that the law will protect the intellectual property rights of foreign investors and encourage technology cooperation based on voluntary principles and commercial rules.

Developing countries are in need of investment, and in the past five years through Belt and Road Initiative, China has helped many developing economies in infrastructure construction and production capacity cooperation, said Qian Keming, vice-minister of commerce.

The Belt and Road Initiative does not increase the debt pressure of countries involved, and as a matter of fact it helps the related economies get more investment they need, Qian said.

The Ministry of Commerce said on Saturday it noticed some countries have tightened the security review of foreign investment in recent years, which may obstruct the investment activities of Chinese companies in the overseas markets.

"We are closely watching this issue and seeing how it develops," Qian Keming, vice-minister of commerce, told at a press conference from the sidelines of the two sessions. "We are firmly against protectionism in any form, and do not want to see the abuse of security review as a way to obstruct the normal investment activities."

"We are willing to work with relevant countries, creating an open and transparent business environment and making the world economy an open one," Qian added.

Second CIIE to be bigger in scale and products

The scale of second China International Import Expo, or CIIE, will be bigger than before, with the planned exhibition area of 330,000 square meters, and will attract more exhibitors, Minister of Commerce Zhong Shan said at a news conference on Saturday.