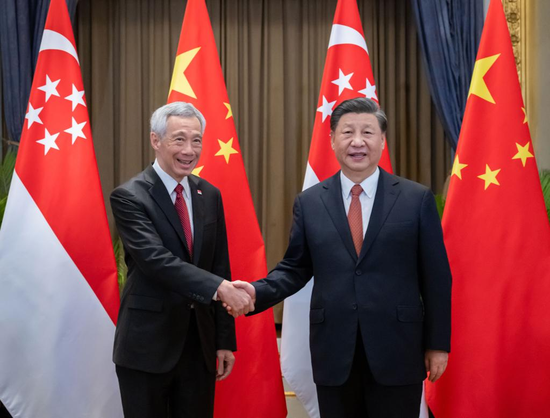 Chinese President Xi Jinping said on Thursday that China welcomes Singapore's in-depth participation in building the new development paradigm and is committed to making "high quality" a distinct feature of cooperation between the two countries.

Xi made the remarks when meeting with Singaporean Prime Minister Lee Hsien Loong on the sidelines of the 29th Asia-Pacific Economic Cooperation (APEC) Economic Leaders' Meeting.

Xi pointed out that facing the once-in-a-century pandemic and changes unseen in a century, China-Singapore relations have maintained a sound momentum. This has not only facilitated the COVID-19 response and economic recovery of the two countries, but also injected positive energy to stability and prosperity of the region.

The China-Singapore relationship is forward-looking, strategic and exemplary, said Xi.

The 20th National Congress of the Communist Party of China (CPC) has made strategic deployment on building a modern socialist country in all respects and promoting Chinese modernization on all fronts. China will work with Singapore for new progress in the all-round cooperative partnership progressing with the times between the two countries, said Xi.

Underscoring China's readiness to develop close high-level exchanges with Singapore, Xi said the two sides need to ensure sound implementation of the New International Land-Sea Trade Corridor as a landmark project of high-quality Belt and Road cooperation between China and Singapore, and promote upgrading of cooperation projects in digitalization, green development and other areas.

Efforts need to be made to conclude follow-up negotiations on upgrading the China-Singapore FTA at an early date, enhance the level of trade and investment liberalization, and facilitate people-to-people exchanges between the two countries, he said, adding that both China and Singapore rely on this region for development and their development is well-integrated into and beneficial to this region.

China will work with Singapore to uphold solidarity and cooperation in the region, oppose group politics, resist bloc confrontation, keep to the right direction of economic and regional integration, and firmly reject the attempts to push for "decoupling and severing supply chains," or to build "a small yard with high fences," said Xi, noting that it is hoped that the two sides will work together to pursue the Global Development Initiative (GDI) in this region.

For his part, Lee expressed his pleasure to once again congratulate Xi in person on the successful conclusion of the 20th National Congress of the CPC and on his re-election as general secretary of the CPC Central Committee.

Noting the strong momentum of Singapore-China cooperation, he stressed that under the complex international situation, Singapore looks forward to further deepening its ties with China, and stands ready to work with China to advance the existing mechanisms of bilateral cooperation and upgrade the three government-to-government projects in Suzhou, Tianjin and Chongqing and the Guangzhou Knowledge City project (3+1).

China's rise is not stoppable, Lee said, adding that a strong and friendly China will bring positive impact on the region and the world, and can help small and medium-sized countries achieve common development. Singapore sees China's development as positive, wishes the GDI well and will explore ways to participate, he said.