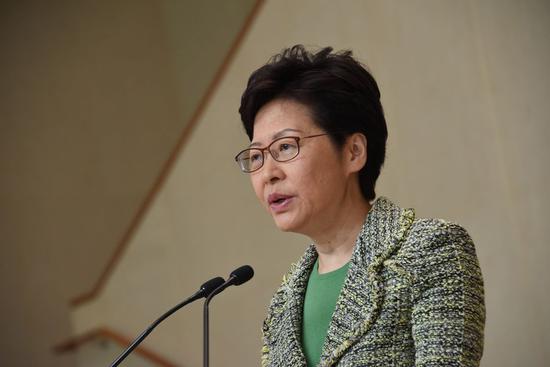 The government of China's Hong Kong Special Administrative Region (HKSAR) said on Wednesday that Chief Executive Carrie Lam and four secretaries of the government will attend the first "Community Dialogue" session to respond to public views and questions.

Lam, together with Secretary for Home Affairs Lau Kong-wah, Secretary for Food and Health Sophia Chan, Secretary for Commerce and Economic Development Edward Yau and Secretary for Constitutional and Mainland Affairs Patrick Nip, will attend the session on Thursday evening, a HKSAR government spokesman said in a press release.

The chief executive and the attending officials may provide an integrated response after a few participants have expressed their views and raised their questions.

To ensure the exchange to be more interactive, the arrangement for responding to questions may be adjusted suitably, the spokesman said.

The spokesman reminded participants of the "Community Dialogue" to allow sufficient time for security checks and observe the Venue Charter.

Lam said in a televised speech on Sept. 4 that the HKSAR government will take four actions to find a way out of the current impasse for Hong Kong, including reaching out to the community to hold direct dialogues.

More than 20,000 people registered for the first "Community Dialogue" session, and 150 of them were selected to participate by computer lot drawing.

Lam reiterated on Wednesday that she hoped to listen directly to the public and exchange views through the "Community Dialogue," and she would continue reaching out to people from different sectors and with different backgrounds to improve governance and make policy formulation more people-oriented.