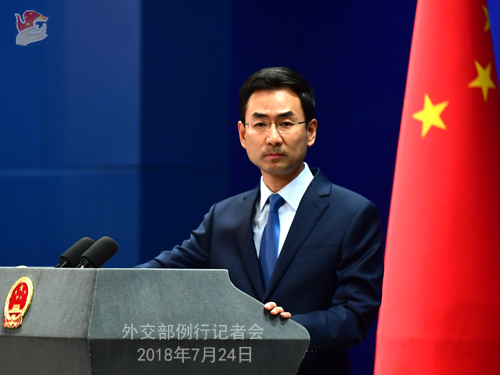 China's Foreign Ministry on Tuesday highlighted the value of cooperation between China and the Philippines.

"Cooperation between the two countries over the recent two years has shown that good neighborliness is the only choice serving the interests of the two countries and the two peoples," Foreign Ministry spokesperson Geng Shuang said at a regular press conference.

Philippine President Rodrigo Duterte spoke highly of cooperation with China in the battle against transnational crimes and drug control at his annual State of the Union address on Monday.

He also said an improved relationship with China did not mean the Philippines would waver in its commitment to defend its interests in the South China Sea and that the Philippines was trying to resolve disputes through bilateral and multilateral platforms.

Geng said that China had noticed Duterte's positive remarks on bilateral relations and cooperation in the past two years.

"China appreciates the Philippine government's independent foreign policy under the leadership of President Duterte, as well as the development of normal relations and mutually beneficial cooperation by the Philippines with other countries based on equal and mutual respect," Geng said.

Geng said, since the improvement of bilateral relations in 2016, the two sides have resumed cooperation in various fields and achieved marked progress, bringing tangible benefits to the two peoples.

Security cooperation is a focus of bilateral cooperation, Geng said. "China firmly supports President Duterte's efforts in drug control, fight against terrorism and transnational crimes, and help the Philippine government maintain the peace and tranquility of the country."

"Bilateral cooperation practice in recent years have shown that good neighborliness is the only choice that serves the interests of the two countries and the two peoples, and is the right direction that the two countries should always stick to," Geng said.

He said, since President Duterte assumed office, China and the Philippines have maintained smooth and effective communication on the South China Sea issue, positively held dialogues and cooperation that safeguarded the overall stability in the area.

"China stands ready to work with the Philippines to properly manage disputes, focus on pragmatic cooperation and jointly maintain the peace and stability in the South China Sea," Geng said. "We will also continue to jointly build regional rules with ASEAN countries including the Philippines, and promote the 'the Code of Conduct in the South China Sea' to achieve more positive progress."