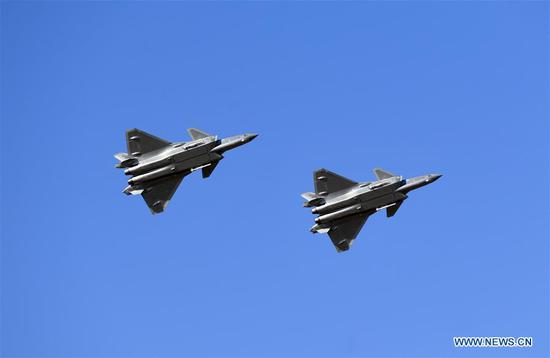 China's most advanced fighter jet, J-20, once again revealed its missiles at the Chinese Air Force's "open day" event on Thursday, which also showcased the outstanding flight performances of a number of the PLA's warplanes.

The open day, which runs from Thursday to Monday in Changchun, Northeast China's Jilin Province, is part of celebrations to commemorate the 70th anniversary of the founding of the Chinese People's Liberation Army (PLA) Air Force.

A pair of J-20 stealth fighter jets flew during the event's flight performance on Thursday morning. Each of them showcased two short-range combat missiles, which rotated out from their side missile bays, where they were usually stored to maintain the aircraft's stealth capability.

This is only the second time the J-20 has showcased its missiles. The first was at the 2018 edition of Airshow China in Zhuhai, South China's Guangdong Province. The aircraft did not open its main weapon bay on Thursday.

A series of aerobatic maneuvers, including high-speed dives, climbs and rolls from the country's most advanced fighter jets marveled the crowd.

The maneuvers were combat-oriented, as each one had a tactical meaning and were used in actual combat scenarios to gain a superior position or avoid an attack, analysts said.

The performance by the Y-20 large transport plane also attracted attention, as it showed its agility despite its size.

The J-16 multipurpose fighter jet shot flares during its performance, as visitors enjoyed the "fireworks."

Military enthusiasts unable to attend the open day on Thursday watched the flight performances live on the internet, and reposted and commented on the event. While some of them only said "cool" or "awesome," others wondered how the Air Force managed to progress so much in the past 70 years.