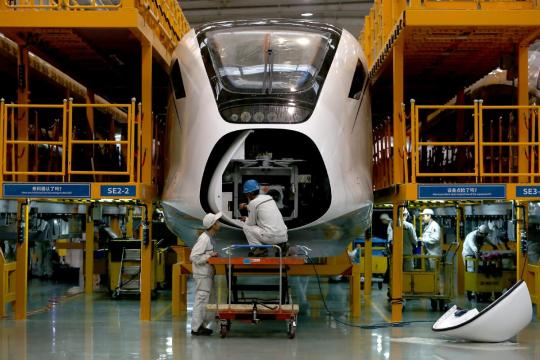 Technicians work on an assembly line for high-speed trains at a CRRC subsidiary in Qingdao, Shandong Province. (Photo/China Daily)

China has eliminated 95 percent of the 2,000 "zombie companies" in its State-owned enterprise system via bankruptcy closures, mergers and reorganization through a three-year program launched at the end of 2016, a senior State asset regulator said on Thursday.

Peng Huagang, secretary-general of the State-owned Assets Supervision and Administration Commission, said the government will speed up the pace of implementing all reform tasks in SOEs to cut backward production capacity and deepen mixed-ownership reform.

"Zombie companies" are economically unviable businesses, usually in industries with severe overcapacity, kept alive only with aid from the government and banks.

China will continue to introduce all kinds of strategic investors, enhance management restructuring and business integration in SOEs in both centrally and locally-administered levels to boost their earnings capabilities, he said.

In addition to cutting the number of "zombie companies", Peng stressed that the SASAC will further cut the administrative role of SOE headquarters to gain more economic returns from the market rather than relying on monopoly, as well as demerge estate management, and water, power and gas supply businesses from SOEs.

A modern corporate system, which separates government administration from business operations, can enable SOEs to function as efficiently as other business entities, said Nie Huihua, an economics professor at the Renmin University of China in Beijing.

The combined profits of China's centrally-administrated SOEs rose 7.4 percent year-on-year to 1.05 trillion yuan ($148.16 billion) for the January-September period, according to the SASAC.

In the meantime, central SOEs in the sectors of construction, mining and metallurgy registered rapid profit growth.

Total revenues of central SOEs reached 22.1 trillion yuan during the period, up 5.3 percent from a year earlier.

Peng from SASAC added that 11,028 SOEs have built a presence in 185 countries and regions across the world with 7.6 trillion yuan of assets by the end of 2018. Thanks to business and market channel diversification, their sales revenue and profit amounted to 5.4 trillion yuan and 131.89 billion yuan in 2018.

Peng said the government will continue to support central SOEs to participate in the development of the Xiongan New Area, the Yangtze River Economic Belt and the Guangdong-Hong Kong-Macao Greater Bay Area, as well as the reform of Hainan province to create more economic growth points.