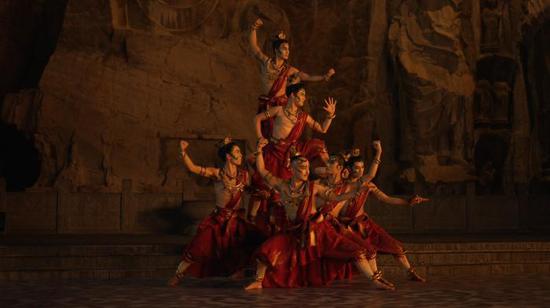 (ECNS) -- "Longmen Jingang,” a dance TV program, has become an overwhelming hit in a series of programs presented on the Chinese Valentine's Day on Saturday. Jingang means indestructible patrons in Chinese Buddhism.

"Longmen Jingang" was entirely filmed by Henan Broadcasting in the Longmen Grottoes, one of the landmarks in Luoyang, Henan Province. Accompanied by melodious music, the Flying Apsaras dance gracefully with elegant postures in front of a stone Buddha. Then the majestic Jingangs echo these flying fairies with powerful dance movements against passionate drums. Dancer movements have highly restored the Jingang sculptures in the grottoes.

Flying Apsaras in Longmen Grottoes are different from those in Dunhuang Grottoes in dancing postures. Acting Bodhisattva in the Longmen Grottoes is rather solemn, which requires a dancer to show more upright postures. Classical Dunhuang dance movements such as rebounding Pipa and joining palms in pranam were also replaced by traditional Chinese instruments like Konghou, Ruan and Sheng in the "Longmen Jingang" performance.

What's more, digital technologies, augmented reality (AR) and 3D modeling have combined the stage with the real scene of the grottoes, thus the history and culture here have been presented through this dance, bringing the stone carvings with a history of thousands of years to life in front of the audience.

This is not the first time that programs made by Henan Broadcasting showing traditional Chinese culture have gone viral on the Internet. The previous Night Banquet in Tang Dynasty Palace was also highly praised by netizens.

Lu Hongli, one of the chief directors, said: "The attention of the program actually stemmed from Chinese people's common cultural genes."

"Young people love traditional Chinese culture and what we need to do is present our culture from a modern perspective," she added.