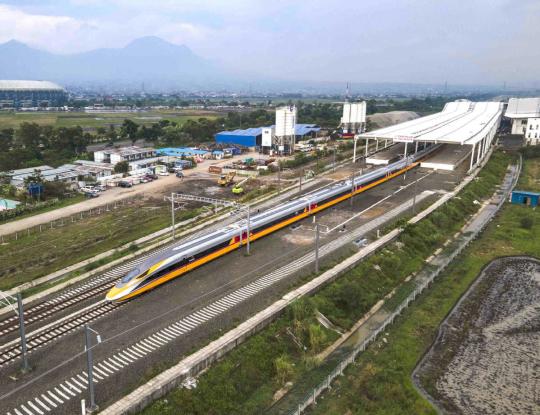 Testing is carried out on a section of the Jakarta-Bandung High-Speed Railway in Indonesia on Wednesday. (JIAO HONGTAO/FOR CHINA DAILY)

China's first overseas high-speed railway project fully adopting the nation's own technologies and standards is progressing at pace in Indonesia, with a successful inspection test run carried out on Wednesday on the landmark Jakarta-Bandung line.

The 142-kilometer line has a designed speed of 350 kilometers per hour and is scheduled to open to the public in June 2023. The route connects the Indonesian capital Jakarta with the city of Bandung to the east and reduces travel time between the cities from more than 3 hours to just 40 minutes.

Construction of the Jakarta-Bandung High-Speed Railway began in June 2018 and is a landmark project of the Belt and Road Initiative and also the hallmark of Sino-Indonesian cooperation, China Railway International said.

Upon completion, it will be Indonesia's first high-speed railway. 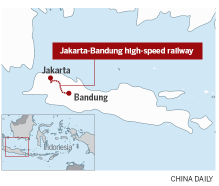 Bandung businessman Jamin Haryanto said he is eagerly anticipating taking the high-speed train, so he won't have to drive for hours to the capital as he does currently. His son Andrew Haryanto said many people from Bandung and Jakarta travel for leisure on the weekend.

All 13 tunnels on the line have been completed, along with more than 90 percent of the civil engineering work, according to China Railway International.

The trains were developed based on the advanced and mature technologies used in China's Fuxing high-speed trains, which can operate at 350 km/h.

The new line will greatly improve local traffic conditions and boost social and economic development along the line. The project also plays an important role in deepening cooperation between China and Indonesia, China Railway International said.