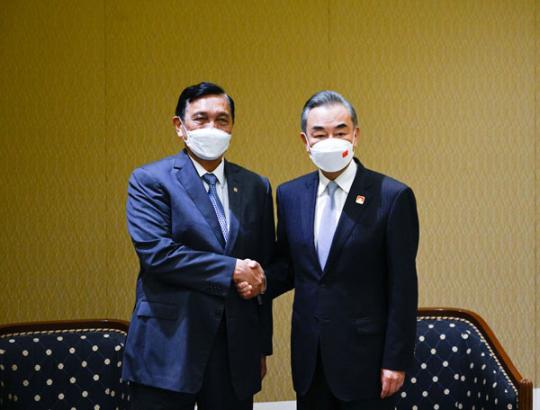 State Councilor and Foreign Minister Wang Yi recognized on Wednesday Indonesia's strong efforts to ensure the success of the Group of 20 Summit in Bali.

Wang made the remarks when he met on Wednesday on the sidelines of the summit with Luhut Binsar Pandjaitan, Indonesia's coordinator for cooperation with China and coordinating minister for maritime affairs and investment.

Recalling Indonesian President Joko Widodo's successful visit to China in July, Wang said the two heads of state reached an important consensus during the visit. He confirmed that the two sides will work toward building a China-Indonesia community with a shared future, which has already been demonstrated in the high level of strategic mutual trust.

Luhut once again extended congratulations on the success of the 20th National Congress of the Communist Party of China, and he expressed confidence that China will make more, and greater, achievements in advancing its modernization, particularly in areas such as enhancing people's well-being.

He thanked China for supporting Indonesia's hosting of the summit, adding that Indonesia will strengthen communication and coordination with China.

Meanwhile, Wang met with Mexican Foreign Minister Marcelo Ebrard on Wednesday. China and Mexico have agreed to take the opportunity of the 50th anniversary of establishing diplomatic ties to strengthen strategic communication and further enrich their comprehensive strategic partnership.

During their meeting on the sidelines of the summit, Ebrard thanked China for providing medical supplies and experts to help his country fight the COVID-19 pandemic.

Mexico will continue to support China safeguard its legitimate rights and interests, actively promote the joint building of the Belt and Road, further promote high-level mutual trust and deepen Latin American and Caribbean countries' cooperation with China, he added.

Wang said that China and Mexico, both independent countries and important emerging economies, have always treated each other with respect and on an equal footing.

China appreciates the role played by Mexico in promoting China's relations with Latin American and Caribbean countries, Wang said, and is ready to work with Mexico to deepen these relations to achieve common development.