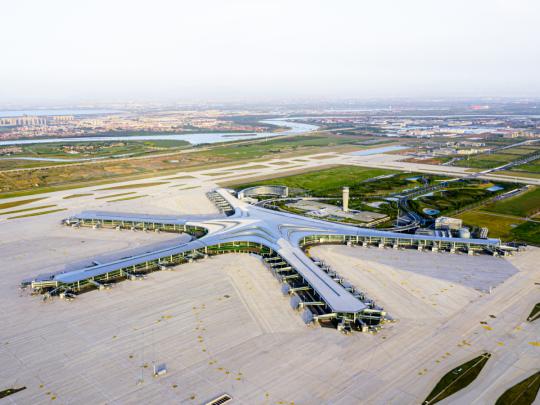 Industry insiders said the airport, which has the highest-level international rating, is expected to improve the region's global connectivity and give fresh impetus to the local economy.

It aims to become a world-class air hub in Northeast Asia and cement the role of Qingdao as a gateway for Japan and South Korea, the airport's operator, Qingdao Airport Group, said.

Located in the Jiaozhou area, the new airport is roughly 60 kilometers from downtown Qingdao.

Construction began in June 2015 and the first phase covers 16.25 square kilometers, with an investment of 36 billion yuan ($5.5 billion).

The airport is expected to be able to handle 35 million passengers a year, 500,000 metric tons of cargo and 300,000 aircraft takeoffs and landings by 2025, according to airport officials.

When the second phase is completed by 2045, the airport will be able to serve some 55 million passengers a year, the officials added.

The city's Liuting airport closed after 39 years of service on Wednesday.

The new airport is designed to provide a good traveling experience and more convenience for passengers. A comprehensive transportation hub, it features seamless transfers to public transportation such as high-speed trains, roads, subway and buses.

The new airport is connected with some 130 domestic destinations and 50 major cities around the world, including 17 in Japan and South Korea.

Bi Jianwu, director of the Economics Institute at the Qingdao Academy of Social Sciences, said the new airport will help Qingdao play a bigger role in the Belt and Road Initiative and give full play to the China-SCO Local Economic and Trade Cooperation Demonstration Area and the Qingdao Area of the China (Shandong) Pilot Free Trade Zone.

"China Eastern Airlines is the first airline to settle in the new airport and has numerous flights heading to Japan and South Korea from Qingdao," Zhou said, adding that the airline will add more domestic and international air routes in the future and promote economic and trade exchanges.

Seol Kyu-jong, a South Korean businessman based in Qingdao, told Xinhua News Agency that the new airport will make it more convenient for business people in the foreign trade sector to visit their clients.