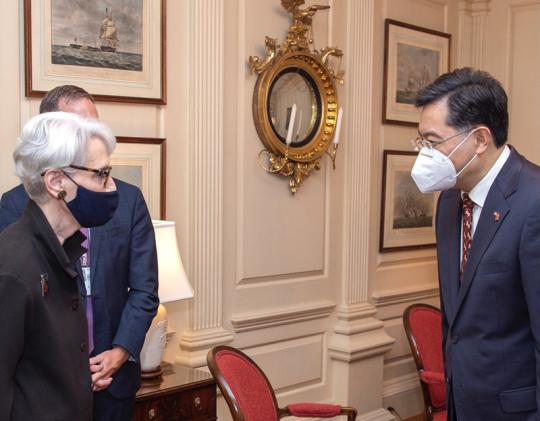 Beijing's new ambassador in Washington said Thursday that he is committed to promoting a "rational, stable, manageable and constructive" China-U.S. relationship.

In his first official meeting with American officials after a two-week quarantine following his arrival July 28, Ambassador Qin Gang met with U.S. Deputy Secretary of State Wendy R. Sherman on Thursday afternoon to exchange views on "issues of mutual interest", according to a readout from the Chinese embassy.

Qin said the bilateral relationship is at a new crossroads, and he will follow the spirit of the telephone conversation between President Xi Jinping and President Joe Biden on Feb 11, the eve of the Chinese New Year, to enhance communication and dialogue with the U.S.side and work to promote that relationship.

Sherman expressed welcome to Qin for assuming office and said that the State Department will provide convenience and support for the ambassador's work in the U.S., according to the statement of the Chinese side.

Both Qin and Sherman posted on Twitter a photo of their meeting at the State Department. Both were wearing masks, following the mask mandate at federal buildings regardless of vaccination statU.S..

Details of the meeting were not immediately available, but Qin told reporters that they had "in-depth and candid" talks and agreed that bilateral relations are of great importance.

To improve such relations, the two sides should resolve the problems through dialogue and communication and manage their differences and contradictions, Qin said.

Qin said he "explicitly" expounded on China's standpoints on the Taiwan question, which he said is the most important and most sensitive issue in the relationship.

Qin, 52, was vice-minister of foreign affairs before being appointed the 11th Chinese ambassador to the U.S., replacing Cui Tiankai, the longest-serving envoy in that position from April 2013 to June of this year.

Qin has said he expected to work to "bring China-U.S. relations back on track", turning the way for the two countries to get along with each other — mutual respect, equality, win-win cooperation and peaceful coexistence — from a possibility into a reality.

Over the past half month since he arrived in Washington, Qin has sent a series of tweets to express his congratulations to Team U.S.A winning the most medals at the recent Tokyo Olympics, celebrating China-U.S.cultural cooperation and tapping collaboration in other areas.

For example, on Tuesday, he tweeted to mark the 175th anniversary of the Smithsonian, the world's largest mU.S.eum complex, which include 19 mU.S.eums and the National Zoo.

In the middle of his two-week quarantine, Qin tweeted about his concern for the rampant spread of the Delta coronavirU.S. variant, writing that, "Infections in the U.S.are resurging, and there're local outbreaks in China. How about our two countries working together on solutions, e.g. more effective vaccines &helping other countries?"

The ambassador also noted opportunities for the two countries to work on environmentally friendly vehicles.

"President Biden announced half of all new vehicles in U.S.in 2030 would be electric. I learnt from GM in Shanghai that it would only produce EVs by 2035 in China. By then, China will have 160 million new energy vehicles, up from 6.03 million in 2021. Great potential for cooperation," he posted on his Twitter account last week.